She is reported to have spent a quarter of an hour at the Plough Inn at Cadsden, in Buckinghamshire, before Mrs Cameron returned to collect her. Number 10 said the couple had been “distraught” when they realized Nancy was not with them. It said the incident had happened “a couple of months ago”. 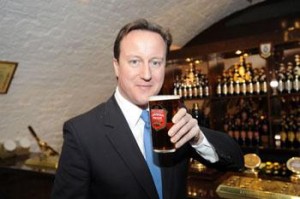 The Camerons were at the pub, near the prime minister’s country residence, Chequers, with Nancy and their other children Arthur, six, and 22-month-old Florence, as well as two other families.

After leaving, Mr Cameron went home in one car with his bodyguards and thought Nancy was with his wife and their other children in another car.

Mrs Cameron had assumed her elder daughter was with her father. The mistake was discovered when they got home.

When the prime minister’s wife returned to collect Nancy she found her helping staff.

Downing Street said no protection officers would face disciplinary action over the incident, adding that security arrangements were constantly under review.

A spokesman said: “The prime minister and Samantha were distraught when they realised Nancy wasn’t with them.

“Thankfully when they phoned the pub she was there safe and well.”

Communities Secretary Eric Pickles, who is promoting a scheme to give English councils a financial incentive to deal with “troubled families”, was asked on BBC Radio 5 live Breakfast if he drew parallels between them and parents who inadvertently left their children in a pub.

“We’re definitely not talking about that – mainly for my job security,” he replied.

Mr Pickles was also asked about the incident during a BBC News Channel interview, saying: “I’m very glad that Nancy was missing for only 15 minutes. It could happen to anybody. It must be any family’s nightmare.”