There was an incident in the St. Louis Cardinals/Atlanta Braves wildcard game today that defines present-day America. It can be summed up by this unspoken command, the unwritten code of non-conduct regarding the game of life as it has come to be played in a superpower not just in decline, but in free-fall: Lifelessly wait until the shitstorm is over. 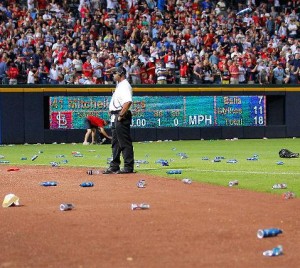 The only problem is, it’s just getting worse!

In the 8th inning, with the Braves ahead 6-3 and men on first and second, Andrelton Simmons, who figured prominently in this comedy of errors, blooped a ball into left field. Shortstop Pete Kozma and left-fielder Matt Holliday converged on the pop- up, and it fell between them when Kosma inexplicably stopped short. Bizarrely, though Kosma was 50 feet into the outfield, the umpires called an infield fly rule and the batter was thrown out.

Cardinal fans roundly booed at first, but in true zombie fashion, then began silently throwing bottles, cans, and any other crap they had in their smarmy little hands onto the field. The game was stopped for 20 minutes as debris rained down, umpires and players alike taking things in stride while taking refuge in the dugouts.

The TV announcers sanguinely repeated things like, ‘this isn’t good,’ and ‘Cardinal fans are disgracing themselves,’ but no stadium announcement, much less a stern warning of prosecution for endangering the safety of players and umps, was blared into the bleachers as far as I could hear. Officials just mutely waited for the shitstorm to end, and then they got back to business as the new normal.

Such is life in Americaca these days. And we’re supposedly in the midst of a ‘recovery,’ with the unemployment rate, which also came out today, indicating a significant drop from 8.1 to 7.8 per cent. 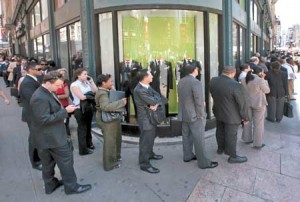 paeans from dispirited right-wingers, and bewildered pains from what’s left of liberals and moderates.

The slowly recovering economy, which conventional wisdom (always being conventional and never wise) maintains will work in Obama’s favor, could actually work for Romney. Why?

Because Americans, having the memories like their dogs rather than the world’s elephants, are starting to believe the shitstorm after the financial and economic collapse at the beginning of Obama’s term four years ago has passed. Therefore, since it isn’t the economy (but the culture) stupid, we can return to the Republican policies that propelled the nation, and the world, into the economic doldrums.

Hey, it’s time for good ol’ American optimism to kick in again, along with bad old American exceptionalism, both of which are the snake oil Romlicans are selling.

Obama keeps thinking the American people are rational actors, who, having been twice burned under Bush, wouldn’t be stupid enough to vote into office again their even more degenerate economic and foreign policy inheritors. And I think Barack Obama feels that if the American people are as stupid as that, he doesn’t want to be their leader anymore. 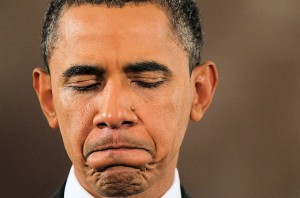 Meanwhile, the lamestream media (as the erstwhile Sarah Palin branded them), including PBS, which stands to lose its yellow feathers if Romney wins, continues to do the nation a disservice by accentuating the horse race rather than the fundamental governmental priorities and policies before the American people in this election.

The hard choices, which Republicans have told and shown they are eager to make–in favor of the oligarchic military-industrial complex–will be decided after the election. Are enough of the people ready to be fooled one more time, so that the halcyon days of America’s optimism, exceptionalism, and growth can return like a rainbow after the black man’s false dawn?

Never mind that Israel will receive a green light to attack Iran under Romney-Ryan, and that an already teetering Middle East will spin completely out of control. Hey, we’re Americans, and we don’t have to grow up and join the world if we don’t want to.

The irony is that when Obama came into office he could have spoken to our better angels, to use a phrase from President Abe Lincoln, whom Barack avowedly sought to emulate. The question is, can he now? And do the American people have any better angels left in them?

Truth be told, Obama believed in his own rationality more than any higher power’s providential unpredictability. And like all people who persist in having things both ways, he could end up having it neither.

It’s fair to ask, does Barack really want to win this election? I don’t mean the hoopster Barack, competitive on the court and courtly off of it, but the man, without Michelle whispering in his ear. What does he want? Does he believe in anything except his own exceptionalism?

If not, we’ll have a new boss, same as the old boss. And he’ll make all the passively endured shitstorms of the present and recent past look like gentle snowstorms.