Costa Rica News – If you live in Costa Rica and had extensive damage caused by the Costa Rica earthquake that originated near Samara you might and are expecting government help in rebuilding or fixing the damage you might have to wait a long time.   By the way this should not surprise you.  Another earthquake is more likely to hit before you actually get your house fixed. 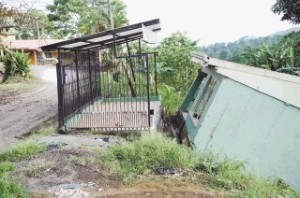 For the majority of victims, solutions take three to six months. Meanwhile, for those that have more serious problems, including needing to relocate, the process will last up to two years, said the Minister of Housing, Irene Campos.

Up to the 1st of October, the ministry had received reports of 2,522 houses damaged and had inspected 1976.

Based on these visits, the entity made a projection on the type of problems they present.

These houes have damaged roofs and cracks in walls and floors.

Meanwhile, 126 families (5%) need new home and need to relocate as the ground was damaged.

Most of those affected are located in the canton of Valverde Vega, Alajuela, one of the hardest hit by the strong earthquake.

According to the inspection done so far, some 380 households (15%) had no damage.

Based on these data, the Housing Miniterio estimated the cost of care for families will be at least ¢ 5,500 million.

Additionally, the president, Laura Chinchilla, announced yesterday that revolve Puntarenas additional resources to municipalities included in the emergency declaration to address the most problematic families.

The Housing Ministry said ¢ 4,000 million will be allocated in that area.

Campos said that aid each family will receive will depend on their economic status. Those with incomes over ¢ 1.2 million a month will not receive any subsidy. So if your house was damaged and you make enough too bad, pay for it yourself.