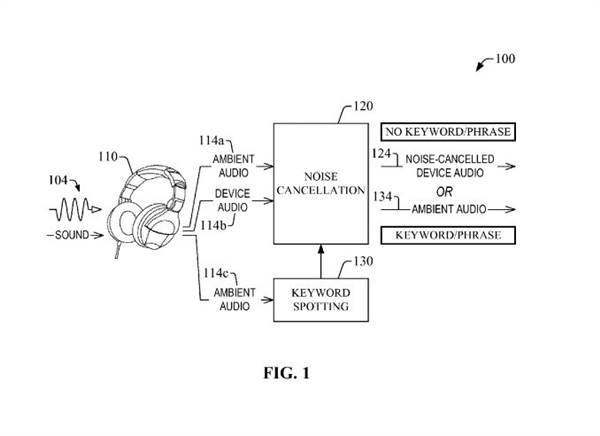 The company was awarded a patent last month for noise-canceling headphones that automatically turn off or on when they hear a predetermined keyword, such as a person’s name, according to the patent filing.

“In at least certain scenarios, ambient sounds that may be intended to elicit a response can include specific keywords, such as specific words or phrases, such as ‘greetings,’ ‘hey,’ ‘hello,’ ‘Ben,’ ‘hello Ben,’ ‘hey Ben,’ ‘lunch time,’ ‘meeting time,’ that can be directed to attract the attention of an end-user of the noise-cancelling device,” explains the patent.

The concept could also have the potential to save lives, since the headphones would be able to turn off when they hear certain frequencies that could indicate immediate danger, such as crossing the street.

An Amazon representative didn’t immediately respond to NBC News’ request for comment regarding the company’s potential plans to bring the headphones to market, but the filings hint at what the future could look like.

The concept calls for microphones to be built into the ears of the headphones that would “listen” for the keyword and then suspend noise cancellation.

The idea sounds similar to Amazon’s Echo speaker, which answers to its wake word, “Alexa.”

According to CNET, the inventors listed on the patent are two of the company’s software engineers, one of whom worked on the Alexa team, according to his LinkedIn profile.

La Condesa in Costa Rica Might Be Bought By Egyptians