Costa Rica News – Santa Cruz Costa Rica is still feeling the effects in their daily life of the 7.6 Earthquake that’s epicenter was just outside of Samara.  Since the morning of September 5, Maria Leal Rodriguez School has been closed. 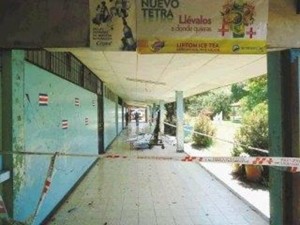 The 520 children enrolled in the institution of Santa Cruz, Guanacaste, are staying home.

The quake left three pavilions, the preschool classrooms and the dining facilities unusable.

Although the two new pavilions are fine, not going to school because of the risk to the students to play or walk near the damaged part.

To avoid interrupting the school year, the Ministry of Public Education (MEP) proposed that classes were given in the School Josefina Lopez or a night school, both in Santa Cruz.

However, parents were opposed to the idea, said Silvia Víquez, administrative vice minister of Education.

At this, the MEP agreed that the school year resumes in Maria Leal Rodriguez School  but once they are demolished damaged classrooms.

Emilia Lopez, director of the school, said that students will be able to attend next Monday, but my money is on another week off.

“We began the demolition and rubble being gathered also will restrict the passage to the danger zones. Fortunately, our institution has enough space for children to develop peacefully, “said Lopez.

For now, teachers are preparing materials for students to catch up faster.

Florida Man Calls 911 Because Daughter Refuses to Get Him Beer