World News – The world’s most wanted drug lord has been captured alive by authorities in Mexico, the Departments of Homeland Security and Justice said today. 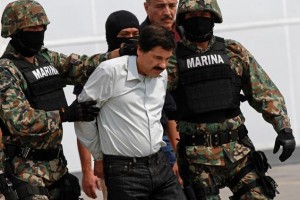 Joaquin “El Chapo” Guzman, a long-time figure on the Drug Enforcement Agency’s most-wanted list, was taken overnight by U.S. and Mexican authorities in Mazatlan, a beach resort town in Mexico.

“Today’s apprehension of Joaquin ‘Chapo’ Guzman Loera by Mexican authorities is a landmark achievement, and a victory for the citizens of both Mexico and the United States,” Attorney General Eric Holder said. “The criminal activity Guzman allegedly directed contributed to the death and destruction of millions of lives across the globe through drug addiction, violence, and corruption.”

Wearing a white shirt and dark pants, the man described by the U.S. Treasury as “the most powerful drug trafficker in the world” was photographed being escorted by Mexican marines as he arrived at Mexico City airport today.

He is being taken directly from the airport to prison, Mexican Attorney General Jesus Murillo Karam told The Associated Press. Before his arrest, Guzman had been on the run for more than a decade since his infamous 2001 escape from a Mexican maximum security prison in the back of a laundry truck.

No shots were reportedly fired during as Mexican marines burst into Guzman’s hotel room at 6:40 a.m. today, where they found the 56-year-old with an unidentified woman, and arrested him along with “a few” of his bodyguards who were nearby, the AP reported.

The operation to catch Guzman was planned and took place over several weeks and began with an investigation by ICE’s Homeland Security Investigation unit, sources told ABC News in Washington.

The capture follows the takedown of several high ranking members of the Sinaloa drug cartel over the past week, during which valuable information was gleaned that helped lead to the Guzman’s arrest, sources said.

A number of Guzman associates were taken into custody last week when Mexican authorities raided a hideout where he was staying, the sources said, but Guzman narrowly managed to escape by exiting through a tunnel shortly before authorities closed in.

Guzman, whose nickname is slang for “shorty,” is the alleged CEO of the Sinaloa cartel, which is estimated to move 25 percent of all illegal drugs entering the U.S. through Mexico. He is facing drug trafficking and multiple other charges and is wanted in at least six U.S. districts and Mexico. 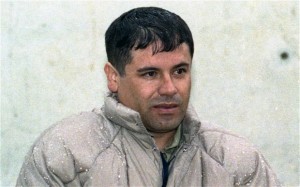 the U.S. over several years.

Despite the State Department’s $5 million reward for information leading to his arrest, Guzman’s drug empire continued to flourish, reaching to places as far away as Europe and Australia, thanks to a sophisticated international distribution system.

Michael S. Vigil, a former senior DEA official who was briefed on the operation, told the AP it was Guzman’s complacency that ultimately led to his capture.

“He got tired of living up in the mountains and not being able to enjoy the comforts of his wealth,” Vigil said. “He became complacent and started coming into the city of Culiacan and Mazatlan. That was a fatal error.”

Vigil also said Guzman may be extradited to the U.S. as it “would be a massive black eye on the (Mexican) government” if he escaped from prison a second time.

Last February, the Chicago Crime Commission branded Guzman the first “Public Enemy No. 1” since Al Capone, leading to him being dubbed as “El Chapone,” in the shadow of Chicago’s other great criminal.

The DEA has said in the past that as much as 90 percent of the marijuana, cocaine, heroin and other illegal drugs sold on the streets of Chicago are supplied by the Sinaloa cartel. Guzman is also charged with drug trafficking, murder, kidnapping and other crimes in New York.

The alleged drug kingpin has also long been ranked among the richest men in the world by Forbes and drug enforcement experts had conservatively estimated the cartel’s revenues at over$3 billion annually.

Before his infamous 2001 Mexican prison escape, Guzman had been serving a 20-year sentence for bribery and criminal association.

The Associated Press contributed to this report.