Costa Rica Arts & Theater – There’s a popular saying in Spanish, “un gato es una gota de tigre.” It comes from a poem by Jairo Anibal Nino and means that a cat has the essence of a tiger. In the same way, a model of a building shows the essence of what the real thing will look like. It shows its essence, its potential. 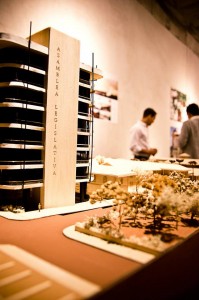 You look at the cat and your mind drifts to the tiger. You look at a blueprint or a physical model made of cardboard, sticks, and paper and you can imagine how grand the building will become.

Klaus Steinmetz understands this well. He sees art everywhere and in everything. He is the one who brought us one of the most important exhibits Central America has seen in some time.

The exhibition is being featured in Klaus Steinmetz Contemporary Art Gallery. It’s dedicated to architectural projects that were made for a competition to become the future Legislative Assembly of Costa Rica. There are ten display models, one per project. The winner of the contest was Nagel Architects, whose work does not show up in the remarkable exhibit, that’s located west of Mall San Pedro.

Annelise Scholl, director of the project, said, “These projects are part of the cultural history of our country, and it would have been a shame if these proposals had not been exhibited.”

Exhibits featuring architectural models are common in big cities, but this is the first one for Costa Rica. Architecture is good art and there is plenty of it to be seen in Costa Rica. We don’t often get the chance to see such elaborate models of what could have been, if another architect would have won the contest.

Check Out the Facebook page of the Klaus Steinmetz Gallery

All Politics Is Global