World News – How many of us have been watching the World Cup and felt like you were watching Mexico’s version of wrestling, Lucha Libre? I am sure Mexico does not find that too funny with Robben’s flop in the box to help the Netherlands beat the Mexican national team.

It has been flat out humorous watching the various over acting of the players to try to draw fouls and cards out of the referees during the games.  I think my favorite players to watch during this entire World Cup has been Robben  of the Netherlands and the infamous Suarez bite.  How can you bite someone and then act like they hurt your teeth?

Only in World Cup play can something this funny happen.

In order to poke fun of this Fourgrounds Film of Canada put together their own video called Everyday Football Fouls .  It depicts people bumping into one an other and then having ridiculous results from the interactions. I have now watched in 4 times, laughing each time.

The video kind of reminds us of the Wall Street Journal info graphic that  is posted below the video. Enjoy. 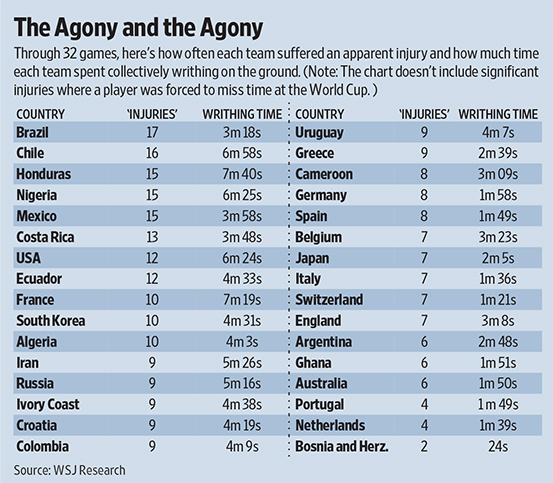