Going from size 22 to size 10 in a year, the retail manager says she found motivation to push herself to diet by selling her old clothes and re-stocking her wardrobe from eBay every time she lost weight. 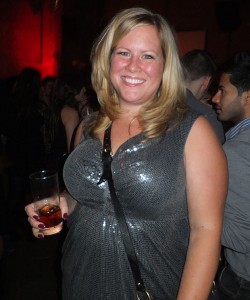 It’s dubbed the “eBay Diet” and Dee, 29, says she wouldn’t have been able to lose so much weight so quickly without the excitement that buying and selling clothes online gave her.

Having shrunk from a loss of 112lb from a size 22 to a svelte size 10 — she says: “I can’t believe how far I’ve come since last year. It’s been one hell of a journey but one I’ve been able to share with lots of other people online.

“When I first started to lose weight with LighterLife it dropped off quickly as I was so overweight — but after the first two stone I worried I might start to revert back to my old ways.

“By this point, I’d dropped two dress sizes and desperately needed a new wardrobe but couldn’t afford to go out and restock it completely. So I decided to try my hand at selling my old size 22 clothes online.”

When she started using the website, Dee, from Southwark, south London, never imagined it would be the start of her incredible eBay weight loss.

She says: “Each time I lost weight and dropped a dress size I would go on eBay and post all of my old clothes. It was like I was saying goodbye to that bigger size for ever.

“I got spurred on by the thought that if I lost more weight that week I could drop another dress size and buy myself a nice new dress or pair of trousers.

“Lots of people who lose weight keep hold of their old clothes and this is dangerous when you’re trying to keep up a diet.

“There were many times I could have reached for the biscuit tin or given in to cravings but by selling my old clothes I knew I’d have nothing to wear if I put the weight on again, so it was a huge motivation to carry on.”

Dee sold a total of £1,000 of clothes on the site and says she’s even considering buying one of the most important dresses of her life on eBay.

She says: “I was a bridesmaid in the summer of last year and was the fattest bridesmaid of them all. I struggled to find a dress in my size and was humiliated on the day and very low in confidence walking down the aisle.

“Luckily, it wasn’t my wedding but when my boyfriend proposed in November last year, I knew I couldn’t walk down the aisle of my own wedding as the fat bride so decided to make a long overdue change.

“Instead of dreading dress shopping, I can’t wait to start and have even begun looking online for my dream white dress. 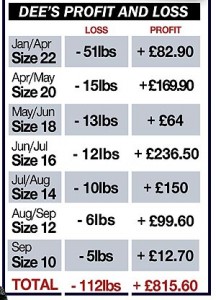 I’m just so happy I’ve managed to lose weight before it was too late.”

Managing her weight had always been a problem.

She adds: “I’ve struggled with weight gain my whole adult life and I can’t remember ever being a size 10, even as a teenager.

“When I was in my teens, I remember going shopping with a friend and trying on a dress. I couldn’t fit into a size 14 and it was the biggest they had. I was so upset I cried. I always ate big portions and snacked a lot during the day. This got worse when I went to university. By my early twenties, I was 17st and a size 18 before I knew it.”

With a big group of friends, and a loving boyfriend, Dee tried not to let her weight get to her — but it was the public proposal from 42-year-old project manager Ron Nilesen that made her finally change her ways.

She says: “It was exactly what I needed to push me into losing weight as I was determined to be a skinny bride.

“I shut myself away not wanting to be sociable for the first six months and it was during this time that I found eBay.

“I’ve always been into bargain hunting so I spent my spare time spending the money I’d made on old clothes, finding nice second-hand outfits to fit my new figure online and would get really excited when the postman delivered them.

“It was my treat for being good with the diet. Because I stayed at home for so long, when I finally started seeing friends again they couldn’t believe the difference.

“I’d lost so much weight and had a new wardrobe of bright, sexy clothes, they didn’t recognise me and it was so nice to see their reactions.

“Now I’m a different person and I cook everything from scratch — no ready meals, no processed foods and no junk food snacks.

“Ron has been amazing. He knows how focused I’ve had to be and has admitted my fast weight loss has been weird.

“Sometimes he’s woken up in the night and thought he was in bed with another woman because I take up less space.

“I’m so pleased that I have had such amazing support from him and if I walk down the aisle in an eBay-bought wedding dress it will be a great way to complete my weight loss journey.”

By JENNY FRANCIS, From www.thesun.co.uk

Costa Rica to Use Cooking Oil for Biofuel for Vehicles