World News – How do you stop a river of lava? The ways they try to do it in the movies does not work. For the Hawaiian town of Pahoa, there is no easy way to stop the smoldering lava pouring from the Kilauea volcano.

In other places and at other times, people have blasted molten rock with seawater, built barriers, and even dropped bombs on lava to keep it from destroying property. But when the 2,000-degree river hits Pahoa, residents will be able to do little more than watch.

Kilauea on Hawaii’s Big Island has been continuously erupting since 1983, with most of the lava flowing into the ocean. A new vent began spewing molten rock in June. The lava is now at the doorstep of Pahoa, threatening the homes of its nearly 1,000 residents.

The big problem is that while lava flows can be diverted they can’t be stopped entirely, and it’s very hard to predict where they will go.

“Suppose you create a diversion and it happens to work,” Peter Cervelli, associate director of science and technology for the USGS Volcano Science Center, told NBC News.

“You might save your house, but it diverts to your neighbor’s house, and you have just created a problem for somebody else,” he said.

People think of lava as an all-consuming fire that destroys everything in its path. But occasionally you will see molten rock flowing around a tree.

How is that possible? Once lava comes into contact with something cooler than itself, the outer layer will form a crust. Build a berm made of rock, dirt or other material that is high enough and the new crust will form a barrier.

That is what was done in 1983 at Mount Etna in Italy, where multiple mounds of rock and ash were constructed to stop lava from destroying the tourist area of town. Evidence shows that people have been trying this method for hundreds of years.

Building a barrier can work, but unless the lava stops on its own, it’s only a temporary solution. 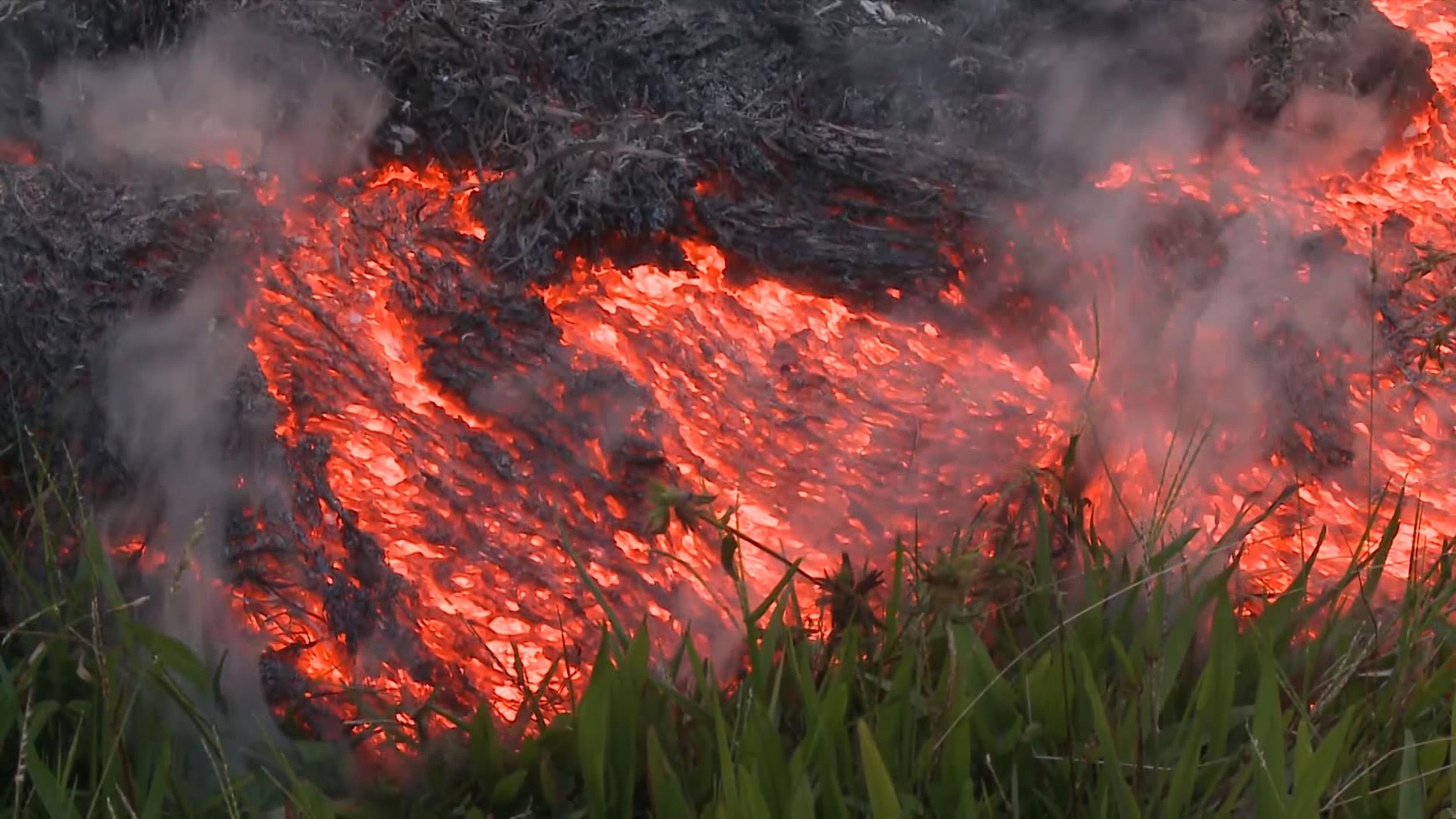 “When it hits that barricade, it will freeze for a little bit, but it will have more lava building up behind it and eventually breach it, like if you build a dam that is not big enough for a river,” Shannon Kobs-Nawotniak, associate professor of geosciences at Idaho State University, told NBC News.

Theoretically you could build ever-larger barriers until you have something like “The Wall” from “Game of Thrones.” Most town and city budgets in eruption-prone areas, however, don’t include funds for something like that.

The lava crust behind a barrier will also eventually stretch out, letting lava pour out through the cracks. Barriers can divert or slow lava flows, but nothing can stop the lava from coming out.

“It’s kind of like taking a BB gun to a freight train,” Kobs-Nawotniak said. “In this case, it’s a very, very slow-moving freight train, but it has a lot of force behind it.”

In 1935, the U.S. military actually tried to slow the lava flows coming from Hawaii’s Mauna Loa volcano with bombs.

Yes, there was a scientific rationale behind the explosive technique. When lava flows underground in tunnels, the hard crust seen from the surface actually insulates the liquid in the middle, letting it flow faster and hotter than it would in the open air.

In theory, it could be possible to collapse those tunnels, diverting the lava elsewhere and slowing it by exposing it to cool air.

Things are a little more complicated in practice. First of all, dropping bombs on sacred volcanoes is “deeply offensive to the traditional Hawaiian religion,” Kobs-Nawotniak said. Plus, it didn’t work in 1935, as the bombs weren’t precise enough to close the tunnels. And, of course, the lava would simply be diverted elsewhere.

“It’s something culturally offensive with very little guarantee of success,” she said.

Lava is hot. The ocean is cold. Hence the strategy employed by residents of Vestmannaeyjar, Iceland, in 1973.

In an attempt to save their harbor, the town’s economic lifeblood, the residents pumped around 1.5 billion gallons of seawater at the molten rock coming from the Eldfell volcano. The idea was that the water would cool the lava front, form a crust, and force it to go somewhere else.

The harbor was not destroyed. But, Cervelli said, it’s not entirely clear whether the frigid water saved it or whether Eldfell stopped early enough that the lava flows would have ground to a halt anyway.

“Hollywood shows lava flows as things that are moving very fast and coming to get you,” Kobs-Nawotniak said. In reality, they are relatively slow, letting people evacuate ahead of time.

That does not mean, however, that they are entirely predictable.

“It’s like watching a tropical storm build,” she said. Scientists have a general idea of where the flows will go, but they don’t know when the lava will stop flowing, and “sometimes it will break through that cold, exterior crust and will ooze out in a direction we weren’t anticipating.”

For the most part, efforts to divert lava flows are more about saving buildings than saving lives. That might not make the people of Pahoa feel any better. But unless Kilauea stops, it’s not clear that a barrier, cold water or even bombs would do much good.