Why Pay Taxes? You Can Payoff the CR IRS

Costa Rica News – You have to love sometimes the fact that Costa Rica is like the wild west when it comes to being able to pay off law enforcement officials to get out of tickets, getting your building permits pushed through by paying off government permitting officials, and now it seems you can get out of paying taxes if you know the right people. 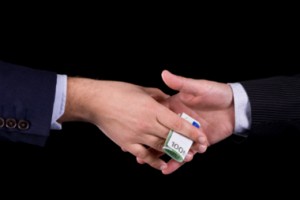 Three officials of the Municipality of Alajuela were arrested on Friday for allegedly erasing the debts of taxpayers in the computer system in exchange for money.

Bailiffs raided the municipal palace to seize documentary evidence and computers from the departments of Collection Management, Accounting, Human Resources and Information Services.

The investigation is linked to 28 cases in which the suspects went into the system to modify the amount of money that the tax payer was supposed to pay. It is estimated that about $84,000 was erased from the system.

When a tax payer came into the collections office they were told how much they could pay to basically get this debt wiped off their record.  A little cash under the table was all it required.

Now the question is will this tax payers that broke the law knowledgeably have to pay the consequences on their end as well or will the payoffs be considered as payment in fill for what they owe?

Knowing Costa Rica and its legal system, the tax payers that made the payoffs will probably be punished and the government employees that took the bribes will get about 6 months paid suspension but still have their jobs…..

It is the wild west in Costa Rica and let’s be honest that is why a lot of us decided to come here.  It is part of the system here, payoffs and bribes are a part of life. You can either fight the system or just go with it.

The world has the phrase…..”Only 2 things in life are certain; death and taxes”……..you can add corruption to that list if you are talking about the Costa Rican government, or any government for that matter.