Why Do People Drive Like Asshats in Costa Rica?

Costa Rica News – More than once while driving in Costa Rica I have thought to myself, “There should be an IQ test in order to get a drivers license.” But the truth is it might just be that people are just not courteous when they drive. I try not to let it effect me but after the third or fourth moron driver it is hard not to yell or flip them the bird. 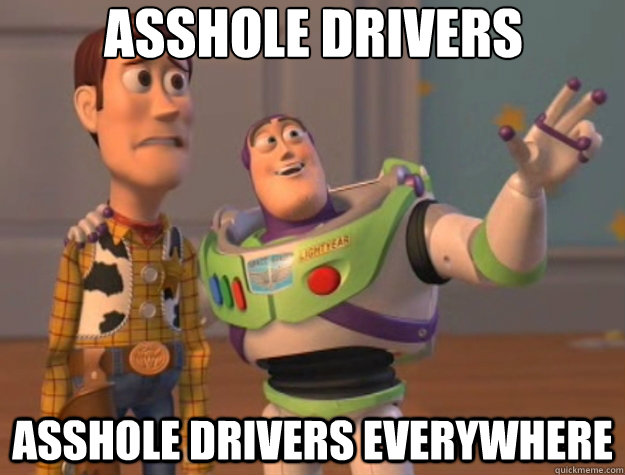 And maybe it is just me but those with more expensive vehicles seem to be the bigger asshats.

For the eighteen years that I have lived in Costa Rica, the majority of which have been in the Metropolitan San Jose area, I have witnessed some pretty horrific driving habits.

I know that I am not the first to make such a statement, nor will I be the last, however, the transformation of some, what are otherwise mild mannered Ticos in a Dr. Jekyll and Mr. Hyde fashion, does deserve a moment of reflection as to why it may happen.

Costa Rica is frequently held-out to be the happiest Country on the face of the planet in the various surveys conducted. It is strange then for a considerable amount of anger and road rage to be exhibited in the driving habits of Ticos. Some Ticos, when behind the wheel of a vehicle, tend to use the vehicle more as a weapon, rather than a means of transport.

“Line jumping” and “cutting-in” is epidemic.

Men tend to be the more aggressive drivers, but I would hasten to say, that in my experience, ninety-nine percent of the time, it will be a man, rather than a woman, who will give you space to enter a line of traffic.

Where does all this pent-up anger come from that is exhibited in driving situations? Does the motor vehicle provide the necessary anonymity required by Ticos to perpetrate violent driving acts on other drivers without fear of any meaningful reprisal? Could it be that Ticos are really not the happy people that they are reported to be?

Discourteous driving habits, particularly in the Metropolitan San Jose area, seem to be the rule, rather than the exception. I know that there are other countries that can attest to poor driving habits as well, but this certainly does not provide an excuse for such activity to go on virtually unchecked in Costa Rica.

Certainly, the response of the Transit Police to such driving habits is less than satisfactory. I have witnessed the Police themselves, particularly on motorbikes, exhibiting poor driving habits in non-emergency situations, such as passing on the right and creating an extra lane between two marked lanes of traffic.

Leaving emergency lights flashing continually on police vehicles, in non-emergency situations also does not instill credibility in police actions in times of an actual emergency. Apparently, the story about, “The Little Boy Who Cried Wolf”, has not been translated into Spanish.

The Transit Police routinely set-up a radar camera speed trap on the Caldera Highway (Route #27) in Santa Ana, in exactly the same spot each time. There are usually no less than five and sometimes as many as seven, or eight police officers gathered around the radar camera, catching only tourists and people who live at the beach speeding, because all the local residents know where they are. Can this be a prudent use of Transit Police resources?