Which Powerball Numbers are Most Frequently Drawn?

Entertainment News – The Powerball jackpot keeps on climbing…it has climbed to $1.3 Billion.  How would you like to celebrate with that kind of money? 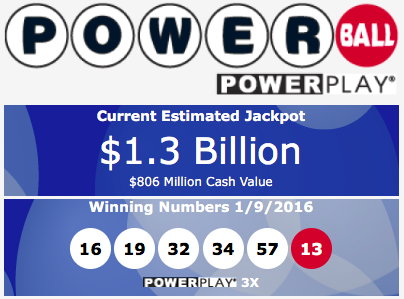 So, how do you pick your numbers? Your birthday? Your family’s birthdays?

Do you have a set of numbers that you ALWAYS play?

According to powerball.com and lotto.com, 75 per cent of the winning tickets were tickets played with auto-pick. Your OWN lucky numbers may not be as lucky as you think.

And you may not know about the Powerball Power Play option. Just $1 could help you multiply your winnings if you don’t win the big jackpot. (Not applicable in California)

Here are the main draw numbers that came up the most in Powerball drawings in the last 15 years, according to Powerball.com records.

Just looking at the Powerball itself, here are the most frequent draws:

Check out the entire lists in the related links below:

The odds of matching every number in the drawing is 1 in 292.2 million, according to Powerball.com.

In the Jan. 6 drawing, a person who bought a ticket in New Mexico did win $2 million, and other ticketholders in a dozen states — California, Connecticut, Florida, Georgia, Louisiana, Massachusetts, Nebraska, New York, Oregon, Tennessee, Texas and Washington — matched five numbers to win $1 million before taxes, according to the multi-state lottery’s website.

If you win it, you won’t ever have to worry about money again… right? Wrong.

What are some crazy things you could do with the jackpot? Well, you could buy 3.72 large Angelo’s pizzas for every person in Ohio. You could give everybody living in Ohio $42.02.

Which state has the most winners?

You might have better luck buying your ticket in Pennsylvania than in New Jersey, if history is any indication.

More jackpot-winning Powerball tickets — 16 since 2003 — have been sold there than any other state or U.S. territory participating in the big multi-state lottery game.

Here is the rundown: