What The Hobby Lobby Ruling Means

World News – The Supreme Court ruled in favor of three family-owned businesses Monday, saying they can refuse to pay for certain forms of contraception that they find morally repugnant. But the decision anticipates some of the arguments against letting employers make these decisions. 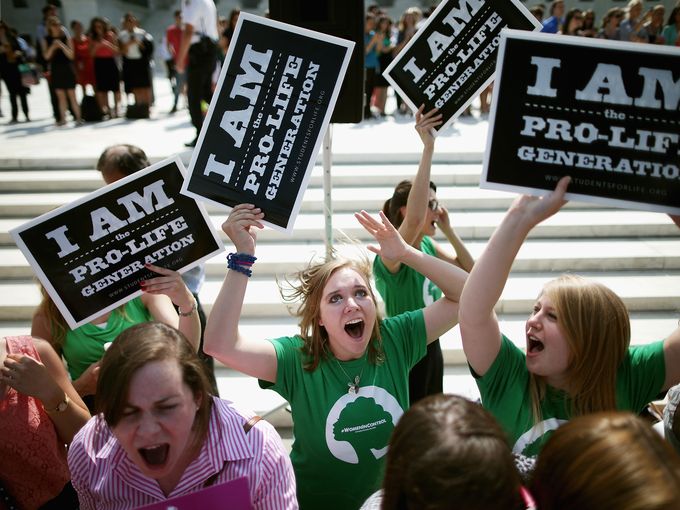 No, it doesn’t mean that employers can suddenly declare that they have religious objections to vaccines, blood transfusions or even paying taxes, the Court says. And women who work for these employers don’t necessarily have to pay for birth control themselves — the federal government can do it, the ruling says.

And it really will have very little effect on the Affordable Care Act, aka Obamacare.

“The Supreme Court’s decision won’t change anything for people seeking insurance coverage through the new health marketplaces. It also won’t affect the vast majority of people who have employer-sponsored health insurance since most workers are in companies that are unaffected by today’s ruling,” Pollack added. “Women enrolling in coverage through a health insurance marketplace retain coverage for contraception as well as other preventive health care services.”

At issue is Obamacare’s requirement that all virtually all health insurance policies pay for a package of essential services, which include cancer screenings and vaccines as well as birth control. The family that owns Hobby Lobby and a Christian bookstore chain sued, as did a Mennonite family that owns Conestoga, a Pennsylvania-based woodworking company.

The decision says the 2010 Affordable Care Act violates a 1993 law guaranteeing religious freedom, notes that Congress defines corporations as “people,” and says only “closely held” corporations are affected, even though that includes most companies in the U.S.

“The owners of the businesses have religious objections to abortion, and according to their religious beliefs the four contraceptive methods at issue are abortifacients,” Justice Samuel Alito writes in the majority opinion. “If the owners comply with the HHS mandate, they believe they will be facilitating abortions, and if they do not comply, they will pay a very heavy price — as much as $1.3 million per day, or about $475 million per year, in the case of one of the companies.”

Alito notes that the Obama White House provided an out for nonprofit religious corporations. Instead of 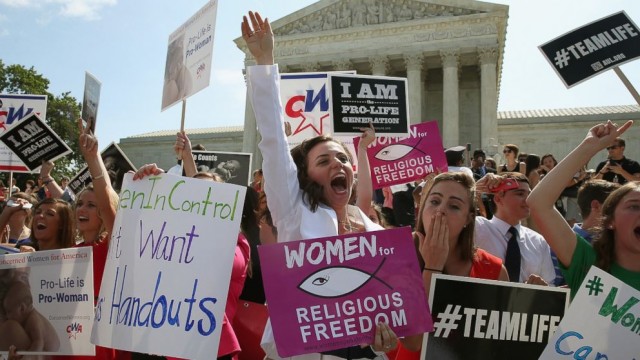 paying for birth control themselves, an outside insurance company can do it. Alito asks, why can’t this apply to the for-profit employers, too?

In fact, why can’t the federal government just pay? “The most straightforward way of doing this would be for the Government to assume the cost of providing the four contraceptives at issue to any women who are unable to obtain them under their health-insurance policies due to their employers’ religious objections,” he writes in the opinion.

White House spokesman Josh Earnest said the administration is trying to decide what to do now. “It is our view … that Congress needs to take action to solve this problem that’s been created and the administration stands ready to work with them to do so,” Earnest told reporters.

“President Obama believes that women should make personal health care decisions for themselves, rather than their bosses deciding for them. Today’s decision jeopardizes the health of women that are employed by these companies.”

Mark Rienzi, senior counsel for the Becket Fund for Religious Liberty, who represents Hobby Lobby, called the ruling a victory for religious freedom. “It makes clear that this is not end of contraception for women. If the government wants to provide it then the government can provide it,” he told reporters on a conference call.

In arguing against Hobby Lobby, the Obama administration and its supporters said a ruling in favor of the companies would open the door to employers who say they have religious objections to vaccinations or even blood transfusions.

Alito’s decision answers this concern, saying the ruling applies only to contraception.

But in a dissenting opinion signed by the two other female justices and justice Stephen Breyer, Justice Ruth Bader Ginsburg said she didn’t buy that and says the majority ruling amounts to the court deciding which religious beliefs are worthy: “…how does the Court divine which religious beliefs are worthy of accommodation, and which are not?” she asked.

“And where is the stopping point to the ‘let the government pay’ alternative? Suppose an employer’s sincerely held religious belief is offended by health coverage of vaccines, or paying the minimum wage,” she asks.

Public health and women’s rights groups were also not comforted by Alito’s attempts to limit the ruling’s ramifications. “I think it is surprising but also disturbing that we would have five male justices rule that discrimination against women is not discrimination at all,” said Ilyse Hogue, President of NARAL Pro-Choice America.

House minority leader Nancy Pelosi, a California Democrat, called the ruling an “outrageous step against the rights of America’s women.”

“Women should not be forced to jump through extra hoops to secure the fundamental health care they need. Allowing employers and CEOs to limit the health care available to employees is a gross violation of their workers’ religious rights. It’s just not her boss’ business,” Pelosi said.

“This is a deeply troubling decision. For the first time, the highest court in the country has said that business owners can use their religious beliefs to deny their employees a benefit that they are guaranteed by law,” said Louise Melling, deputy legal director of the American Civil Liberties Union.