World News – “Disco Night Sept 11,” a new book by Red Hook Editions, presents Magnum photographer Peter van Agtmael’s powerful documentation of America’s involvement in the post-9/11 wars in Afghanistan and Iraq. “Disco Nights 9/11″ is one of the first books that simultaneously looks at the effects of war at home and in the field. Van Agtmael’s images are accompanied by anecdotes, interviews and snippets of conversation. The book is available for pre-order, and a selection of images has been made available to ABC News Picture This. 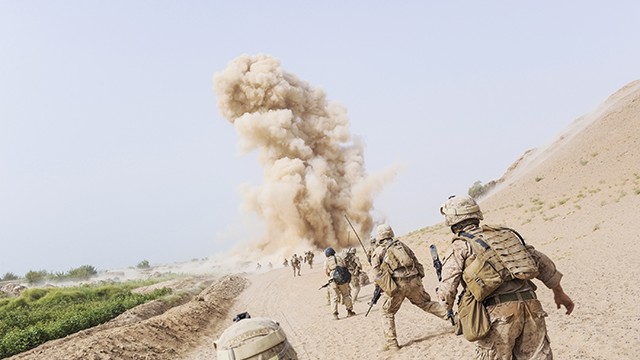 A few minutes earlier, Marines on patrol had noticed some suspicious activity. A motorcycle had driven by slowly, the driver staring at them intently. From a nearby ditch there was clearly someone watching their movements. As the troops walked down the road, an IED exploded and several men disappeared into the cloud, but no one was killed or badly hurt. The Marines gathered themselves and crossed a dry irrigation canal to another road.

The commander ordered five men from the town to come to their position. Five village elders complied warily. The radio picked up chatter among the Taliban suggesting another bomb was hidden by the road. At gunpoint the commander questioned the men. To one old man he yelled, “That bomb went off because you didn’t stop them!” The man responded, pleadingly, “I don’t know anything, so how could I stop it?” The commander waved him off, “Alright, get away from here, alright.” After questioning the elders, the Americans forced them to form a human shield. The Afghans were told to fan out across the road and walk forward in tandem. The Marines followed cautiously behind. As reporter Dexter Filkins and I began documenting these actions, the Marine commander halted the patrol and decided to return to base. (Mian Poshteh, Helmand, Afghanistan, 2009) 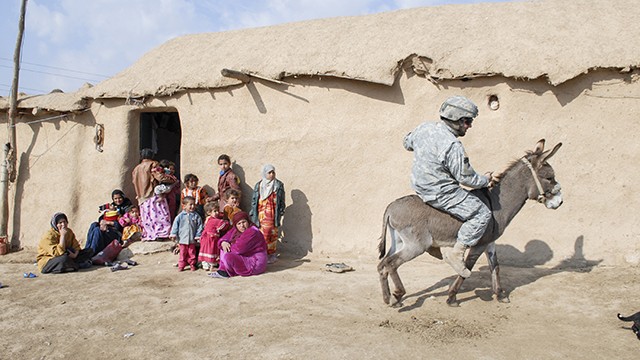 The wary inhabitants of this isolated village in Nineveh had never seen an American patrol, and asked what country they were from. They had heard of America, and served sugary tea to the soldiers but otherwise kept their distance. The troops took turns riding the donkey and posed for pictures holding lambs. In the Bible, Nineveh is described as a wicked city. God sent the prophet Jonah to preach there, and its inhabitants repented. God decided to spare the city. (Nineveh, Iraq, 2006) 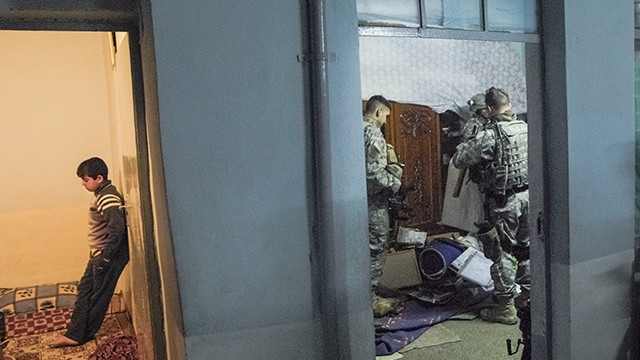 American soldiers on a foot patrol noticed that two young men were eying them and fidgeting. Anticipating violence, they stormed their house. During the search the soldiers teased a young medic about his virginity. The soldiers had already searched hundreds of houses during their deployment, and the banter was casual as they swept the family’s possessions onto the floor. In the next room they were questioning a boy. “Have there been any new faces around the house lately?” “Are your brothers coming and going at strange hours?”

The boy muttered noncommittal answers and stared at the ground. They found no contraband in the house, but the hands of the young men came up with a faint residue of explosives. The lieutenant in charge of the platoon decided to detain them, though he thought they were innocent. The explosives tests were notoriously unreliable. They were blindfolded, and their hands bound with zip ties. The rest of the family began screaming and beating their chests. The soldiers locked them in a room and pushed the two stumbling men toward the Stryker. (Mosul, Iraq, 2006) 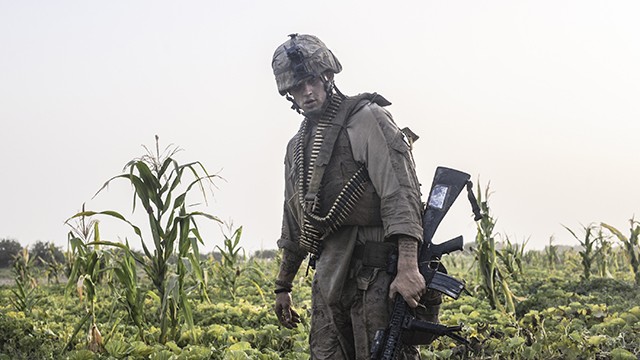 A Marine after a firefight with the Taliban. (Mian Poshteh, Helmand, Afghanistan, 2009) 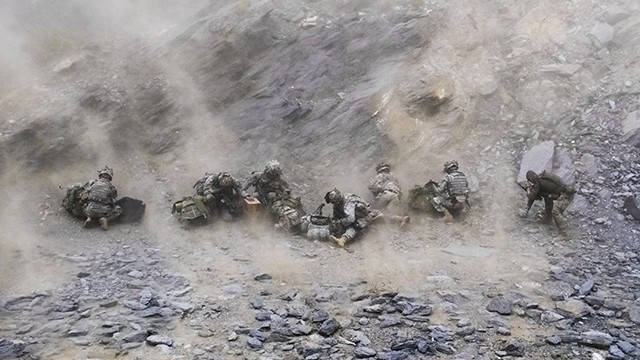 A U.S. Blackhawk helicopter lands at the Ranch House, a small American outpost deep in the mountains of eastern Afghanistan. There were no decent roads and all medevacs, re-supply and transport were done by helicopter. Blackhawks were in short supply, forcing the U.S. military to turn to outside contractors. They rented ex-Soviet helicopters, rickety and ancient and known as “Jingle Air.” They came with pilots, some of whom had served in the Russian Army during the previous war in Afghanistan. They were storied figures, legendary for their bravery under fire and rumored to be heavy vodka drinkers in flight. (Waigul Valley, Nuristan, Afghanistan, 2007) 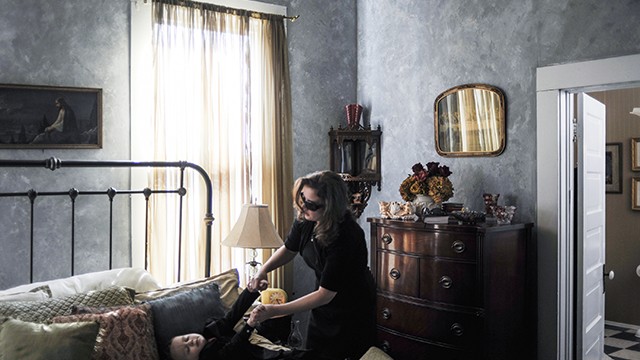 Rosie Ricketts wakes up her son Aiden before the viewing of her husband Seth, killed in Afghanistan the previous week. The temporary coffin carrying Seth Ricketts arrived at Dover Air Force Base on March 2. The bodies of dead soldiers are brought back to Dover and their families are often on hand to attend a brief ceremony as the flag-wrapped cases are removed from the plane and taken to the mortuary. The ban on media coverage of these transfers, in place during the Bush Administration, was lifted in February 2009 when Secretary of Defense Robert Gates ruled it was the families’ choice if the press should be allowed to photograph the return of their dead. In general, about half the families consent to coverage. (Glen Mississippi, 2010) 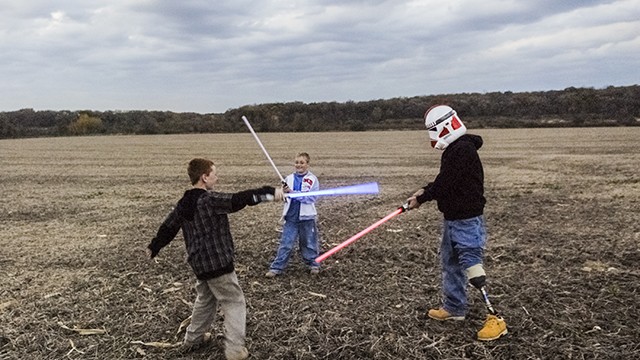 Raymond Hubbard with his children, Brady and Riley. Since his injuries, Raymond has become an avid collector of “Star Wars” memorabilia. This is one of several family photos I took at Raymond’s request. (Darien, Wisconsin, 2007) 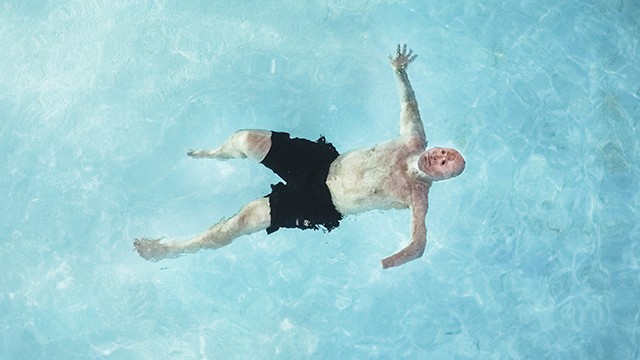 Bobby Henline didn’t realize how badly he was injured until he returned home. When that sank in, he prayed for God to take him in his sleep. He didn’t want to be a burden on his family. (Houston, Texas, 2013)

All images are courtesy of Peter van Agtmael and Red Hoook Editions. To see more of Peter’s work, visit his website. For more featured photography curated by ABC News’ photo editors, and at Picture This, the ABC News photography blog.

The Future of Biomedical Research in Costa Rica