World News – Good luck getting this rock on an engagement ring. 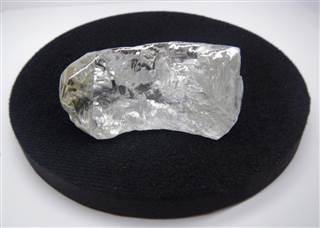 A “spectacular” 404.2-carat diamond — which is almost three inches long — has been found in Angola. It is the 27th biggest ever discovered, according to the Australia-based Lucapa Diamond Company.

It has been analyzed as a rare Type IIa, a category that makes up less than 1 percent of the world’s diamonds and means it is virtually flawless.

The diamond is the largest ever found in Angola, at almost twice the weight of the 217.4-carat “Angolan Star” recovered in 2007.

Lucapa did not give any indication of the value of the diamond, which was found at the Lulo mine, a deposit some 435 miles east of the capital Luanda.

The mine is run by Lucapa, which has a 40 percent interest, with the Angolan government-run diamond company Endiama and private firm Rosas e Petalas holding the other 32 and 28 percent respectively.

Angola is the world’s fourth-largest diamond producer by value, behind Russia, Botswana and Canada.

The largest diamond ever found was the Cullinan Diamond, which was recovered in South Africa in 1905 and weighed more than 3,100 carats. It was split into nine parts, the largest of which is known as the “Great Star of Africa” and is mounted on a golden scepter in the British Crown Jewels.