Costa Rica News – Vandana Shiva will be arriving in Costa Rica this very month. In case you haven’t heard her name, she is an environmental activist and physicist from India who travels to speak out against genetically modified crops. 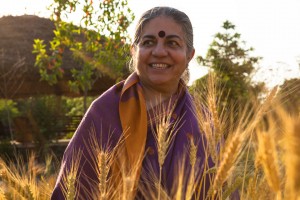 Last month, 80% of Costa Rica was declared GMO-free. That’s over 50 cantons. Various community organizations and environmentalists have come alongside lawmakers to make a push for a nationwide ban.

Shiva is not all about GMOs. She’s also vocal about the issue of globalization. All together, she has authored over 20 books about activist ideas. She has coined the term “seeds of slavery,” for GM seeds.

She has met some criticism, such as that from professor of plant molecular genetics C.S. Prakash, from Tuskegee University. He said, “Vandana Shiva would rather have her people in India starve than eat bioengineered food.”

Relief groups brought high-nutrition soy to millions of Indians who lost homes in a cyclone and Shiva insisted the country withdraw it. She will give a lecture on GMOs at the University of Costa Rica on the 21st.