Costa Rica Sports News – There was never any doubt that the Americans would crush Costa Rica on Sunday afternoon – but that wasn’t the point. The match was less about the result and more about a World Cup victory lap as coach Jill Ellis cycled through her bench, using all her substitutions to give 17 players time on the pitch in an easy 8-0 victory. 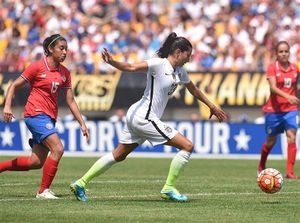 But for the players that had quiet World Cup showings or may find themselves fighting for a place on next year’s Olympics roster, it was a chance to prove their value. To that end, forward Christen Press, who didn’t have the breakout performance some predicted in Canada, played like she had something to prove, out-hustling her teammates to notch a hat-trick. Veteran winger Heather O’Reilly, who has seen her stock drop under Ellis, nabbed a brace.

But the first order of business, of course, was celebration. In their first match since winning the World Cup last month in Canada, the US women debuted their new kits with three stars above the crest to signify World Cup wins in 1991, 99 and this year.

A whopping 44,028 fans turned out for Sunday’s romp at Heinz Field, the home of the NFL’s Pittsburgh Steelers, making it the largest-ever standalone crowd to watch the USA women in a friendly.

The match perhaps the most special for defender Meghan Klingenberg, a native of Gibsonia, Pennsylvania, who scored in front of her hometown crowd in the 56th minute off a Tobin Heath cross. Klingenberg ran to the bench and Ellis tossed her a “Terrible Towel,” the famous rallying prop for the Steelers, and Klingenberg waved it around as the crowd gave her the largest ovation of the afternoon.

Despite the lopsided scoreline, the match certainly didn’t deliver on the spectacle and fireworks of the World Cup final against Japan six weeks ago. Several of the USA’s goals came off bad clearances and non-existent marking from the Costa Ricans, which showed the Central American side has plenty of work to do after exiting in the group stage of their first-ever World Cup this summer.

Julie Johnston, the USA’s 23-year-old breakout defender from the World Cup, scored in the 36th minute on a rising header that has become something of a signature move for her. Carli Lloyd, the big-goal hunter who stunned the world with her hat-trick and audacious half-field chip against Japan, had a relatively quiet match on Sunday, coming off after 55 minutes.

Ellis was keen to dole out minutes to the veterans on the roster. Shannon Boxx, Christie Rampone and O’Reilly, players that saw precious few minutes during the World Cup, all started against Costa Rica. O’Reilly nabbed the opening goal in just the fourth minute, stripping the ball from a defender in Costa Rica’s own end and slotting it near post.

Ellis has been clear that the victory tour will start as a celebration before it turns into the serious business of preparation for the Olympics in Rio de Janeiro. The early stops of the victory tour overlap with the National Women’s Soccer League season, where all but one of the USA’s World Cup players compete, forcing quick turnarounds for the players. Ellis said she was being mindful of that until it’s time to switch gears.

“In the early stages, the players are still in their league play so it really is about rotating players and celebrating each one of the 23 here that got us to our goal this summer,” Ellis told Fox Sports 1 before kickoff. “But as we move forward and opponents come in, it’s about starting to build. Olympic qualifiers are right around the corner for us.”

Unlike on the men’s side, the Olympic games are a prestigious senior team tournament for women’s national teams. It also requires an 18-player roster, five less than Ellis brought to Canada this summer, meaning some tough decisions may lie ahead.

Boxx and Lauren Holiday have announced plans to retire before the Olympics in Rio, but it’s notable that the USA had the oldest team in this summer’s World Cup with an average age of 29.5. Abby Wambach, 35, has said she hasn’t made any decisions about retirement and is planning to try for the Rio roster.

The USA and Costa Rica will vie for a spot in next year’s Olympics during a qualifying tournament from February 10-21 in Houston and Dallas. Before then, the USA has nine more friendlies lined up in this victory tour, including some against tough opponents like Brazil and Australia. They face Costa Rica again on Wednesday in Chattanooga, Tennessee.

For Costa Rica, these friendlies are likely a more important one in their preparations to try to qualify for the Rio Olympics. Only two teams from Concacaf will earn spots and the USA will almost assuredly be one. Costa Rica will have to beat their Central Americans competition, plus Canada and Mexico for another spot.

By Caitlin Murray, The Guardian