Costa Rica Soccer – Clint Dempsey was the super sub for the USA. 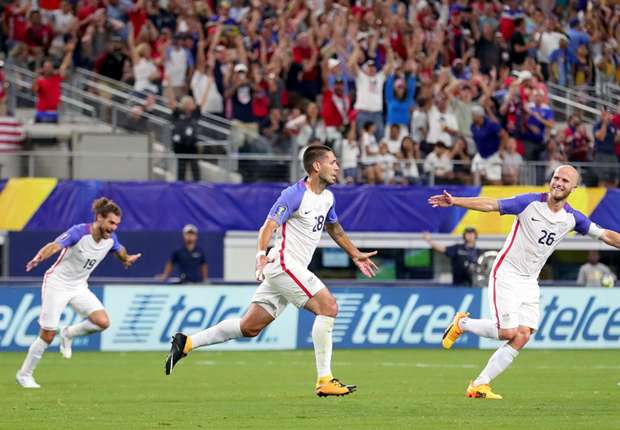 The United States men’s national team punched its ticket to the 2017 Gold Cup Final on Saturday with a 2-0 win over Costa Rica at AT&T Stadium in Arlington, Texas. The victory was anchored by a 72nd-minute breakthrough from Jozy Altidore and free-kick brilliance courtesy of Clint Dempsey.

Altidore’s goal, which was set up by a beautiful feed from Dempsey, was his first in his last 10 USMNT appearances.

Dempsey provided the icing on the cake 10 minutes later when he curled in a low free kick past Patrick Pemberton to tie Landon Donovan’s U.S. goal-scoring record with his 57th tally for the Stars and Stripes.

After Los Ticos dismantled the United States 4-0 last November in a hexagonal World Cup qualifier, the Red, White and Blue were determined to come out with some pep in their step and press forward.

Another strong scoring opportunity presented itself in the 15th minute when Altidore passed up a chance near post and centered a pass inside the box to Kellyn Acosta, who couldn’t quite corral the ball for a shot on goal.

And while manager Bruce Arena’s squad dominated more than 60 percent of the first-half possession, a lack of finishing power in the attacking third left the door open for Costa Rica.

The first 20 minutes of the second half were more of the same, but Dempsey’s entrance as a substitute in the 66th minute provided the U.S. with a necessary energy boost.

After Dempsey nearly set up Acosta for a blistering goal from outside the box, some tremendous buildup and a savvy look-ahead to Altidore allowed the U.S. to jump in front.

The 34-year-old’s free-kick stunner capped off what proved to be a fruitful final 25 minutes of regulation for USMNT, and that stretch should give Arena’s squad loads of confidence entering the final.

By virtue of the win, the U.S. will head to Levi’s Stadium in Santa Clara, California, for Wednesday’s championship tilt, where it will await the winner of Sunday’s semifinal between Mexico and Jamaica.