Costa Rica News -The United Nations’ highest court ruled Wednesday that Nicaragua violated Costa Rica’s territorial sovereignty by establishing a military camp and digging channels on a small chunk of land near the mouth of the San Juan River, and ordered Managua to pay compensation. 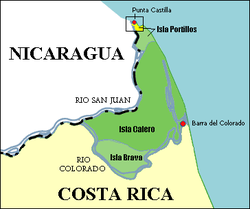 The International Court of Justice ruling established that Costa Rica owns a three-square-kilometer (1.2-square-mile) piece of land near the shores of the Caribbean Sea that had been at dispute for years between the Latin American neighbors.

The ruling addressed complaints by both countries in two linked cases about construction work carried out in recent years near the remote mouth of the river — dredging and channels dug by Nicaragua and a road along the river bank built by Costa Rica.

Court President Ronny Abraham said that Nicaragua’s excavations and military presence on Costa Rican territory also breached an order made by the world court in 2011 and that Nicaragua twice breached Costa Rica’s navigation rights on the San Juan, which forms part of the two countries’ border.

The world court said the countries should now negotiate how much compensation Nicaragua must pay for “material damages.” If they fail to agree within a year, either country can ask the court to settle the amount.

“Nicaragua considers this ruling as a mandate to close this chapter,” the government said in a statement.

Judges also ruled that Costa Rica violated its obligation under international law to carry out an environmental impact assessment before beginning construction of a road along the Costa Rican bank of the San Juan.

Decisions by the court based in The Hague, Netherlands, are final and legally binding.