Two Weeks in Costa Rica on a Motorcycle

Costa Rica Travel – Here in Teton Valley, the month of May has the ability to crawl along slowly like no other month. For the past two years, since moving to the valley, I have stayed behind as countless valley dwellers, whether seasonal or year-rounders, have flocked towards warmer climates. Similar to Donald Trump’s opinions, the weather in spring is consistently inconsistent. Summer truly is so close and yet so far. This year, I decided I couldn’t handle another May. On a dreary day in March, armed with my credit card, I booked two cheap tickets for my boyfriend, Taylor, and I to one of the warmer-sounding destinations I could find, San Jose, Costa Rica. 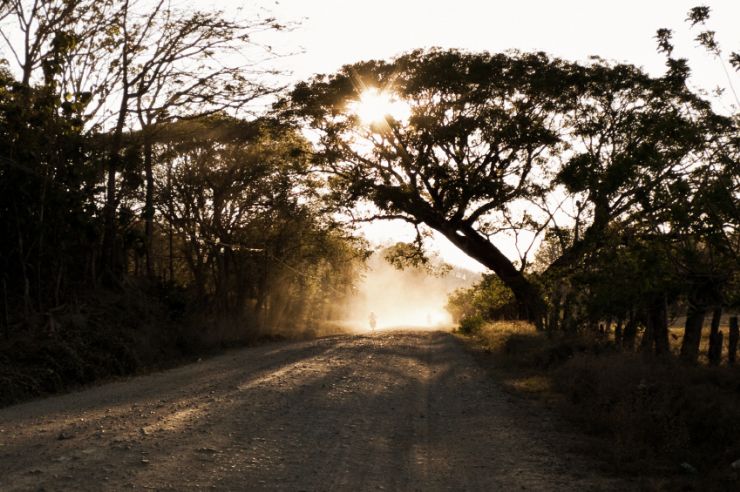 Two months later, at the very beginning of May, we found ourselves sitting, or more accurately sweating, on Honda Tornado 250cc dual sport motorcycles. Sweat poured down my back and soaked my hair. Leaving the rental shop in San Jose, we escaped the big city and traversed the carreteras (roads) westward. We climbed across the Cordillera de Talamanca mountain range and the road morphed from a paved asphalt freeway to an array of winding, single-lane dirt roads, resplendent in potholes. Jungle coated the mountains and whenever we stopped for a drink of water, the shrill pitch of cicadas and various unseen birds would fill the silence left by our engines. We passed slow moving trucks on the way, the vivid red and turquoise paint of the vintage Land Cruiser models contrasting with the rural countryside. We rode our way down south along the Pacific Highway, passing picturesque beaches, dense palm tree farms, and surprisingly hipster cafes, complete with iced espresso and passion fruit pie. Every ten miles, we’d pass “soda,” establishments ranging from food stands to restaurants. The common entrees included gallo pinto, a rice and black bean mix with cilantro and onion, and casado, consisting of white rice, black beans, a salad, and a choice of meat.

After two days of riding, we reached the small pueblo of Puerto Jimenez. This town served as our port of entry to the Parque Nacional Corcovado. This national park, in a phrase I would hear repeated over and over, contains around “2.5 percent of the world’s biodiversity.” Basically, if you like animals, Corcovado was the place to visit. In an effort to keep tourists safe and limit damage to the habitat, visitors to Corcovado are required to hire a guide and reserve permits in advance to explore the park. After some frantic Google searches and emails at the airport on the way to Costa Rica, I had secured a spot for the two of us through a local company called Osa Wild. Our guide Bolo, short for Bolivar, led us on the 12-mile hike along a coastal trail on the periphery of the jungle. Collared anteaters, coatis, peccaries, tapirs, crocodiles, squirrel monkeys, white faced monkeys, howler monkeys, spider monkeys, toucans, scarlet macaws, leaf cutter ants, army ants, iguanas, glass frogs, and a variety of snakes and birds were a sample of what we were able to glimpse. For two nights, we slept on foam padding under mosquito nets in a group room at La Sirena Ranger Station. The only thing that suffered during my trip to Corcovado was my hygiene. A combination of insect repellant, sunscreen, and perpetual sweat came together to form a layer of glue on my skin. Regardless, it was worth it for the time spent trekking through the jungle each day, listening to the sounds of the wildlife, only a quarter of which you could actually see amidst the dense forest. There was something of interest in every direction, from the parasitic strangler fig to the owl butterfly with its ever-watchful decoy of an eye.

After three days in the jungle, we made our way back to Puerto Jimenez and upon returning to town, rode our bikes back north along the coast in search of the ever-entertaining sloth. After a day spent searching for them amidst the trees of Manuel Antonio National Park, we were rewarded with a few obscure glimpses through the branches. Later that night, I mentioned to our taxi cab driver, in awkward Spanish, “Me gusta los perizosos.” (I like sloths). A fitting name, the Spanish word ‘perizoso,’ translating to lazy, is the name for the slow-moving sloth. The kind driver then took us to a busy section of downtown, and, pointing up in a small tree, showed us the closest sloth we had yet seen. I felt similar to a tourist in Jackson who wants to see a moose so badly on a wildlife tour only to see one outside their bathroom window the next day.

Leaving behind the coast, we had a full day of riding across rivers, up mountains through the cloud forest, and down the mountains through densely farmed coffee plantations. After loading my backpack up with my bodyweight in bags of coffee, we survived our chaotic journey back to civilization through the streets of downtown San Jose. Costa Rica, in my limited scope of two weeks on the back of a motorcycle, is a beautiful country. The sheer amount of wildlife in Corcovado National Park and the surrounding Osa Peninsula is spectacular. We were met by warm and welcoming people, ranging from our incredibly kind guide Bolo in Corcovado, to the taxi cab driver that drove us to the airport in San Jose (and who told me that I must sing in Spanish if I really want to know the language). It was a great trip and it more than satisfied my need for warmth and excitement during the normally languid month of May. However, as I walked down the stairs out of the plane in Jackson Hole, I smiled as I inhaled a deep breath of crisp, cold, and, most importantly, dry, mountain air. It was good to be home.

As they say in Costa Rica, pura vida!