Costa Rica News – The wave of green turtle deaths in Central America has spread to Costa Rica, where 44 of the animals were found dead along the Pacific coast. 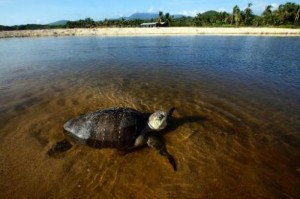 Green turtle deaths have also been reported in Nicaragua and El Salvador, with scientists suspecting that a toxin released by algae may be responsible.

Experts are performing necropsies on the green sea turtles (chelonyas mydas) found dead in Guanacaste province and the results are expected within a week, veterinarian David Herrera said.

A scientific team that obtained live and dead specimens to study only found indications of human activity behind the deaths in three cases, leading experts to suspect that a neurological syndrome is to blame, Herrera, a member of the team, said.

The team, however, has not ruled out human causes in the turtle kill, Herrera said.

At least 233 turtles have died this year from ingesting “toxic substances” in El Salvador, the Salvadoran Environment and Natural Resources Ministry said.

Environmentalists suspect that the sea turtles were killed by fishermen using explosives, a possibility being investigated by Costa Rican biologists.

Where Will European Satellite Crash Into Earth?