Costa Rica Travel News – Costa Rica makes up for what it lacks in size with what it offers in natural diversity. The beaches, volcanoes, and national parks draw millions of tourists annually. The five most popular parks in the country are described below. 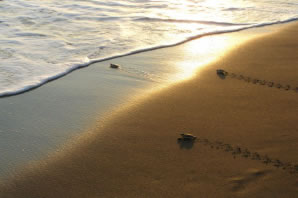 Tortuguero is the most remote. It’s accessed by boat only. The branched river canals through mangroves are famous among nature enthusiasts, especially fishermen. You will see monkeys, crocodiles, sloths, snakes, and rare birds, while on your way to the town. From July to November, you can watch the process of turtle nesting and then the miracle of the babies hatching.

Arenal is the most active volcano in the world. It’s cone shape often spurs smoke, and sometimes lava. There are hiking trails on one side of the volcano, naturally heated pools, rope bridges, and both luxurious and budget hotels in the area.

Manuel Antonio is the nicest beach on the Pacific side of the country. The sand is pure white and the water looks just like the Caribbean, although it’s not. This national park is best known for its abundance of playful monkeys and raccoons. Iguanas and parrots are also frequently spotted.

The Rio Pacuare is great for wildlife watching, and even greater for rafting. There’s nothing quite like white water rafting in such a private place. You can spend the night at a nice eco lodge, the Pacuare Lodge. Its onsite restaurant is excellent.

Corcovado National Park, in the southern part of the country, is the most untouched rainforest in Costa Rica. It has beautiful black sand beaches. Hiking and snorkeling don’t get better than this place. An added bonus is that dolphin and whale tours are available in the area.