Costa Rica News – Costa Rica is applauding the International Court of Justice’s strongly worded order to apply new provisional measures against Nicaragua for its continued misbehavior in the ongoing border conflict near the mouth of the Río San Juan. 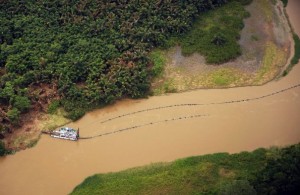 By unanimous decision, the world court again ordered Nicaragua to remove all personnel of the contested border zone and to repair damage it caused by cutting two new trenches through the disputed territory. The ICJ ruled that the new trenches, which nearly connect the Río San Juan to the Caribbean Sea, represent a “real risk of irreparable prejudice to the rights” of Costa Rica.

The court ordered Nicaragua to backfill the trenches (or caños) within two weeks and then report back to the magistrates with “all necessary details, including photographic evidence.”

The urgency, the court said, is because the damaged caused by Nicaragua represents a “real” and “imminent” threat of “irreparable prejudice.”

“First, during the rainy season, the increased flow of water in the San Juan River and consequently in the eastern caño could extend the trench and connect it with the sea, thereby potentially creating a new course for the San Juan River,” the ICJ order reads. “Secondly, the trench could also easily be connected to the sea, with minimum effort and equipment, by persons accessing this area from Nicaraguan territory.”

The ICJ also noted the presence of a Nicaraguan military encampment located “only metres away from the trench” and the fact that Nicaragua “did not rule out the presence in the disputed territory of other equipment that could be used to extend the trench.”

Nicaragua claims the trenches (which Costa Rica estimates are 20-30 meters wide and nearly 300 meters long) were cut by accident. Nicaragua says President Daniel Ortega gave instructions to halt dredging on Sept. 21, after he discovered that former guerrilla leader and self-styled dredge boat captain Edén Pastora had taken it upon himself to carve new trenches through disputed territory. But the ICJ says that excuse is not good enough.

“The Court is not convinced that these instructions and assurances remove the imminent risk of irreparable prejudice, since, as Nicaragua recognized, persons under its jurisdiction have engaged in activities in the disputed territory, namely the construction of the two new caños, which are inconsistent with the Court’s Order of 8 March 2011,” the ICJ order reads.

The ICJ also unanimously ordered Nicaragua to remove its Sandinista Youth camp from the disputed area on Harbour Head. The makeshift camp of alleged environmentalists belonging to the Guardabarranco Environmental Movement have been occupying the disputed spit of alluvial land since April, 2011.

By a vote of 15:1, the ICJ ruled that Costa Rica “may take appropriate measures related to the two new trenches to the extent necessary to prevent irreparable prejudice to the environment of the disputed territory” upon first consulting with the Secretariat of the Ramsar Convention and after giving Nicaragua prior notice. In doing so, Costa Rica is not allowed to cause any damage to the Río San Juan.

Today’s preliminary measures do not affect the ICJ’s final ruling on the border issue, which could come next year. The court is still considering Nicaragua’s separate appeal for measures against Costa Rica for its alleged environmental damage caused by building a riverside highway paralleling the Río San Juan.
Costa Rica is celebrated today’s court order as a “triumph for international law” and a “notable judicial victory for Costa Rica,” in the words of foreign minister Enrique Castillo, who was in Washington, D.C. today to meet with Roberta Jacobson, US Assistant Secretary of State for the Western Hemisphere.

In past weeks, Castillo has blamed Nicaragua of “expansionism” and accused the neighboring country of “affecting the balance of Central America and peace in the region.”

Costa Rican President Laura Chinchilla today tweeted, “We feel very satisfied with the resolution emitted by the ICJ. It confirms that international law is in defense of our sovereignty.”

Nicaragua, for its part, is downplaying today’s court order as no big deal. The country’s permanent representative to the ICJ, Carlos Argüello, told state media that the order doesn’t represent any “radical change” and that Nicaragua intends to comply fully.

“The court ordered something precisely that Nicaragua already said it was willing to do,” Argüello said.

In a very brief statement, the Ortega administration today said it will “faithfully comply” with the court’s orders and called on Costa Rica to “abstain from all types of actions that could aggravate or prolong the controversy before the Court, making it more difficult to resolve.”