Well I thought that this would have happened in Costa Rica or one of the Central American countries, perhaps we will have a Costa Rican do it as well one day or perhaps maybe one of the drunk womanizing leaders in the Costa Rican Government. A Norwegian tourist got to experience a side of travel that no man has experienced before…probably. 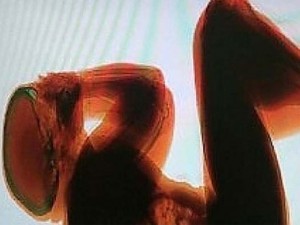 The unidentified 36-year-old man was at Rome’s Leonardo da Vinci-Fiumicino Airport to catch a flight to Oslo. According to The Telegraph, when he found nobody at the airline desk, he went behind the counter and proceeded to take a nap on the baggage belt, with his actual bag beside him. He did not awaken when the belt began to move, and proceeded to travel on it for 15 minutes before airport officials spotted his curled-up body on the X-ray monitors.

There was no security threat to the airport, reports The Guardian. “There is a security system – a sort of roll-up blind – which can only be opened by the member of staff who loads the baggage,” a police officer is quoted as saying in the paper. “[The Norwegian] could have carried on going round the main belt, but he could never have ended up in sensitive areas of the airport.”

An official told The Telegraph, “There’s usually an episode like this once a year and we are alert.”

Once awoken, the man was taken to the hospital over concerns surrounding his X-ray exposure, reports the Mirror. He was then reported to prosecutors and faces charges for causing alarm, the Irish Examiner says.

Belen the Most Competitive Canton in Costa Rica Due to Technology