Well if any one questions the ethics and just the flat out selfishness of the deputies that Laura Chinchilla surrounded herself with look no further than this court case. However, you cannot say much about a woman that married a guy over 25 years older than her to launch her political career and finance it. These deputies with their maids and lack of morals are not much different than her.  As they say birds of a feather flock together. 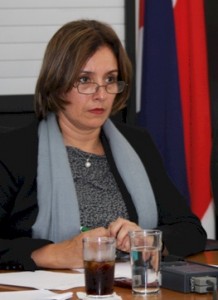 The Labour Court Small Claims sentenced the deputy of the Libertarian Movement, Damaris Quintana Porras, without justification for firing her maid. The judgment was delivered Friday in Goicoechea, San Jose. The trial lasted eight months.

The ruling states that the defendant shall pay an amount close to ¢ 400,000, for holiday, bonus, notice and severance pay, for the eight months that the applicant, Gloria Reyes Sotelo, she worked as a maid in the house of the deputy during 2011.

Quintana refused to pay the applicant the requested money, saying that an employment relationship never existed, but that the worker only came occasionally to carry out cleaning.

The deputy argued that this decision was expected by the judicial authorities.

The congressman added that for her this is a done deal and will pay the amount set by the Court.

Leila Ross, attorney for Sotelo, said the ruling shows that the applicant did work for the legislator and that, therefore, was entitled to payment of severance, and vacation notice.

So this deputy who probably scams at least $400 a week from the Costa Rican tax payers refused to pay the maid $800 and even wasted more tax payer money by dragging a court case out over an 8 month time period.  After the decision was made the deputy then still does not admit wrong doing and says that the court always favors the domestic help in these decisions and claims extortion. This entire problem could have gone away if the maid was just paid $800 8 months ago.  Great example being set by those in power in Costa Rica.

Does the judge get a commission from the plaintiff ?