Waves of three meters and a high tide caused the evacuation of 250 people from 35 homes that were flooded on the Central Pacific Coast in Costa Rica.  The incident happened Saturday at 5 am, about 300 meters north of the school in Esparza, Puntarenas. Walter Fonseca, chief operating officer of the National Emergency Commission (CNE) confirmed that, in coordination with the Municipal Committee Esparza, it was possible the evacuation of families. 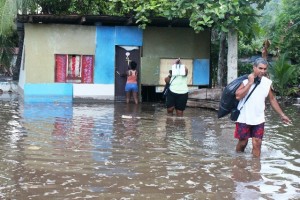 “It enabled a hostel in the district Holy Spirit, in Caldera, for relocating families, but some have not wanted to stay there, others chose to stay with relatives. In addition, food supplies were sent, foams and blankets, “said Fonseca.

Of the 250 people affected, few of them had the opportunity to take some belongings at the time of storm.

“We have suffered damage to all the houses, everything happened at dawn. We had to spend the rest of the morning on the road, in front of houses, “said Luis Carlos Chavarria, a resident affected by the phenomenon.

After the surf, two of the 35 flooded homes were destroyed.

The CNE and the Municipality of Esparza coordinated for a clean tractor road and build a retaining wall to protect the houses.

Omar Lizano, an oceanographer at the University of Costa Rica, explained that this phenomenon was caused by several factors.

“This tidal wave, caused by storms in the South Pacific, joined at high tide and a ten-foot waves that made it hit harder on the beach.

“Also, because in Caldera are taking sand to build a dam, this has caused an imbalance in the beach sediments, helping to swell up more quickly to the shore,” explained the expert.

Diego Herrera, director of Traffic, said that while there is high tide, the road between Puntarenas and Caldera will be closed and will allow other routes.