There is a day in everyone’s childhood when they first learn what “natural selection” is, and then there is another day a few years after that when they see it in action, as all of the pretty girls gather around the virile star quarterback and spit on the chubby kids when they walk by. It’s easy to spend the rest of your life thinking that your bad luck with the ladies is just evolution trying to filter your weird face and frail physique out of the gene pool.

But that’s not entirely true; a lot of what keeps the bouncers from letting you into the best clubs also gives you some important advantages. For instance … 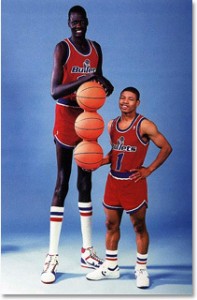 Let’s face it: People don’t usually consider “short” to be a synonym for “sexy” — there’s a reason Tom Cruise has made a career of hiding the fact that he’s only 5’7″. But there is one benefit of being short, and it’s not that you can be smuggled in a suitcase: Taller people are destined to die sooner than their stumpy-legged peers.

In fact, researchers have found a multitude of studies showing that shorter people generally live longer than taller people, and this isn’t just some random coincidence that scientists are confusing with a real pattern — they base these findings on studies that have been done all over the world. For example, the longest-living people are from Okinawa, Japan, and the average height of their elderly is a mere 4’9″. They’ve also found that taller people contract heart disease and cancer more easily, while in shorter cultures, such as some African tribes, these diseases are virtually nonexistent.

“Hold on, smart guy,” you may be thinking, “If this is true, then why do scientists say that we’re getting taller on average, as well as living longer?” Well, it probably has a lot to do with the fact that our knowledge of medicine is much better than it used to be. While taller people are generally more sickly, we have the medical expertise to kind of keep up with it.

How are we so sure? Because coronary heart disease was rarer than a healthy meal at Taco Bell back before the 20th century, during a time when people were on average 4 inches shorter than today. And in countries whose populations have only recently increased in height, such as Singapore and India? Yep — CHD is more prevalent.

And this isn’t just Mother Nature being racist — there have also been studies that very obviously point out the connection between height and longevity, all within the same peoples, and even the same profession. Look at the charts yourself: 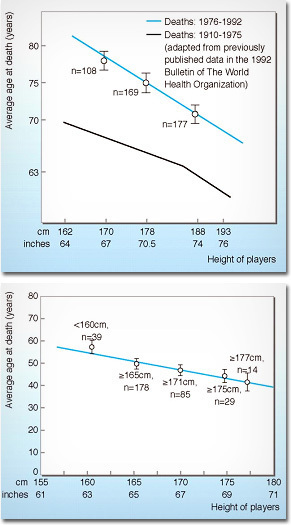 The first chart shows baseball players of the 20th century, while the second chart shows the average Frenchman in the 19th century. The pattern? Shorties live longer lives.

So what are the biological reasons as to why this occurs? Other than the fact that it’s probably much easier to get your head caught in ceiling fans, scientists speculate that, since taller people have more cells in their bodies, they are more exposed to carcinogens, and so are more at risk of developing cancer. And how much is this risk, exactly? Researchers have found that for women, every extra 4 inches of height you have over 5 feet is another 16 percent chance of developing cancer. That’s right — you’re more likely to get sick simply because there is more of you. It sounds like cartoon logic, but it also appears to be true.

So you rolled a less than average score in the genetic lottery. You’ve probably had to spend your whole life watching jealously while better-looking dudes blazed through entire cheerleading squads. Well, there may be some small consolation in the fact that Johnny Adonis over there might be shooting blanks. Studies have shown that there’s a connection between how attractive you are and your sperm count, and it’s not the one you think: Unattractive males are just more fertile.

You might think that this makes the opposite of evolutionary sense, but evolution knows what it’s doing, which is why you’re not in charge of it.

Think about it: Nature already assumes that attractive guys are getting more action, but that doesn’t mean they’re able to produce sperm faster than anyone else, so biology forces them to conserve their ammunition. If you’re unattractive, on the other hand, your junk knows that each time it comes into contact with lady parts might be the last, so it gives it everything it’s got.

In the interest of full disclosure, the above studies were conducted on animals, not people. But that doesn’t mean that nobody has gone ahead to see if it applies to human beings as well. When scientists tried to find the closest thing they could to an objective measure of male attractiveness, they found that guys with deeper voices tend to be more attractive to women. We assume that the first thing they did with this information was try to invent some kind of voice-deepening drug for their own use, but the second thing they did was test their sperm count … and yes, the Justin Biebers were packing more heat than the James Earl Joneses. 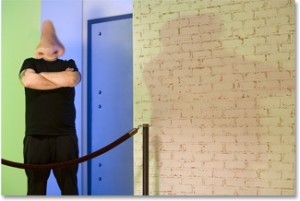 People are so self-conscious about the size of their noses that, in the U.S. alone, there are 50,000 rhinoplasties done per year. When people look in the mirror every morning, it’s clear that they don’t want to see a whole bunch of nose staring back at them. But it seems now that cutting off your schnoz might have a negative effect on your health. And we don’t just mean if you’re doing it yourself.

Researchers have found that big noses give you better protection against bacteria and infections. And although you might assume that an unusually large nose would be more adept at Hoovering up large swaths of the environment, it turns out that the bigger the nose, the better it is at keeping the world out.
To test this, researchers made two artificial noses, one of them 2.3 times the size of the other. They found that the bigger nose inhaled 6.5 percent fewer particles.

Wait. How would the bigger nose inhale less of anything? Well, a bigger nose doesn’t mean you breathe more. You still need the same amount of air. It’s just that if you have a bigger nose, it’s more likely to suck in air instead of your mouth. And that’s good, because your nose is designed as a filtration device, but your mouth isn’t. So the further all those diseases, pollens and anthrax spores have to travel, the greater the chance that they’re going to get tangled up in that jungle of nasal hair in your enormous honker.

And you don’t even have to worry about breathing three months of crap because you’re too lazy to change the filter.
And this even works if you’re a mouth-breather. The experiment showed positive results even when the researchers had the fake-nose monstrosities suck in the air around their lips. Apparently, this is because a big nose simply gets in the way of airborne particles before they can invade your respiratory tract. If we had any sense at all, we’d be attracted to huge beak-nosed people, knowing they’ll make our children more resistant to disease. But who cares about that? They look weird.

All our life we’re taught that women prefer “alpha males,” and it’s not just pickup artist douchebags telling us that, but also scientists, who have the biggest incentive to tell us that this is a lie. It’s something to do with confident, muscular men being better equipped to fight off invading tyrannosauruses, despite the fact that evolution hasn’t caught up with the idea that these days security means being able to squeeze another thousand bucks out of your tax return.

The good news is, evidence suggests that this rule goes straight out the window in times of economic recession. Bizarrely, that’s when ladies start to appreciate some sickly, shy, pasty action.

Studies conducted on women attending college at first seemed to confirm what most guys have been led to believe — women prefer strong guys with a lot of earning potential, even though women in college are working toward their own careers and won’t necessarily need the protection. But when the researchers inspired fears of recession and bankruptcy in the women, they found results that completely ignore what evolution has taught us. When they compared the online dating profiles of strong, beautiful men against more normal, wimpy, “follower” men, more women thought that the latter were better to have as husbands.

So why the sudden change of heart? The researchers suggest that women consider “wimpy” men less likely to abandon them. You know, because they’re lucky to have a woman in the first place. They may have less money, but they have staying power.

The good news for all the beta males reading this is that we’re in a recession right now. So go out and spread your wild oats, just as long as you’re prepared for heartbreak when the economy recovers. Don’t be devastated: Evolution makes women leave you. 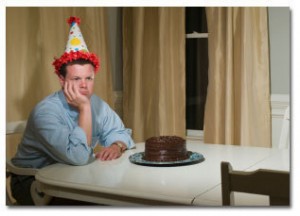 Despite the archetype of the dark, brooding, Johnny Depp-style hero, on average it’s still the upbeat, smiling guy or girl with a healthy sense of humor who gets the dates (for you lonely types — yes, it helps to be approachable). But they also die younger than their scowling peers.

In probably one of the biggest studies ever done, researchers followed the lives of kids born in the 1920s until the day they died. Apart from knowing that their whole lives were just a giant experiment, they lived a pretty normal existence, and the participants involved had various personalities and attitudes. Some of them were the happy, cheerful, “cool” kids in school, while others were more reserved, shy and downright boring.

The results were surprising. When they were compiled in 2011, some 90 years after they began gathering data, scientists found that the kids who had been rated “highly cheerful” in school had gone on to die younger than the brooding ones. Why? One reason is because the happy kids wound up making riskier life choices, and you can only take so many risks before one of them puts you in the ground. The less smiley, reserved types were also less likely to make risky decisions.

We’re not trying to depress you here. All we’re saying is that if you want to live a longer life, it helps to be miserable the whole time. This is why people in CR live longer, the CR government makes it so you are miserable 23 hours a day.

Only in Costa Rica for Week of Aug 6th