Thousands Line Up in Nicaraguan Embassy in Costa Rica

Costa Rica News – The Costa Rican government has put a deadline for Nicaraguans living in Costa Rica to get their paperwork done to achieve residency.  This is causing huge lines at the Nicaraguan embassy in order for them not to receive fines.  Thousands of Nicaraguans who have even spent the night in the street, to request the documents they need to regularize their situation in Costa Rica. 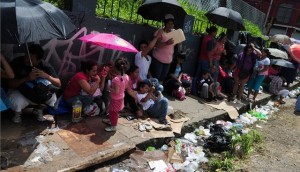 Most of these people go to the embassy in search of the birth certificate, police leaf, or consular registration, passport or provisional.

According to the ambassador, Harold Rivas, they are serving an average of 1,500 people a day.

This is the result of these measures taken by the Directorate General of Immigration, are so that Nicaraguans have their papers in order.

There are four transient cases. Nicaraguans under one of the first three have until November 17 to accommodate his situation, without having to pay fines.

In this case these assumptions are: people who received their residence since 2003, people over 65, disabled people or people under age 25 who have five years living in the country, and people who have children born in Costa Rica.

In the fourth scenario transitory workers or farm chores, have until February 17 to file the paperwork to Immigration.

To solve the problem of long lines, Rivas said that starting Monday will telephone appointments.

While the Costa Rican government is to expedite Nicaraguans becoming residents in CR it is still next to impossible for gringos to accomplish the same thing.