Costa Rica News – Well I guess the Korean President is repeating what Laura Chinchilla has lied to him.  If you notice the countries that are most interested in investing in Costa Rica and becoming a part of it being “Green”, are the ones in which shark fins are being served on a regular basis. Although commonly associated as a Chinese delicacy, sharks fin soup is also consumed in Korea, Thailand, Vietnam and Japan. 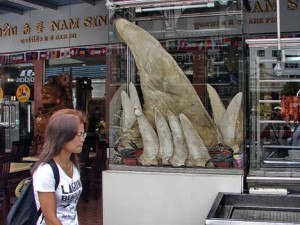 Ok so they have received a $8 Million payout from China for allowing them to harvest the sharks in Costa Rican waters and now Korea another huge shark fin importer is excited about working with Costa Rica.  How stupid does the Costa Rican government and Laura Chinchilla think the people in Costa Rica and around the world really are?

South Korean President Lee Myung-bak praised Costa Rica for environmental preservation and happiness of its inhabitants. HAHAHAHAHA. What a joke! The happiness poll maybe should just be a measure of how naive the Costa Rican population has become or perhaps they are just afraid to speak the truth.  The Costa Rican government has made it a criminal offense to talk bad about them, as they try to control the media within its boundries.

He emphasized that the country has 45% of forested area, which places it first in the world in environmental conservation.I guess he does not see the environmental destruction of the failed mining project and the infamous border trail.

“Also, you are the happiest country in the world and all this creates much envy me,” said Lee who immediately focused on highlighting Chinchilla’s leadership and achievements in areas such as education, economy and safety. I guess that he has bought the bullshit that Chinchilla has fed him.  There needs to be actual investment into the education system for this to be true but government wants an uneducated population in order for them to believe the smoke and mirrors that the CR government is using in regards to the scams and corruption and environmental destruction happening within its ranks .  The economy is being pushed away from tourism and they are enacting laws to hurt businesses.

The leaders met privately for an hour. On the table were issues of cooperation, support on issues of common interest, trade and investment and strengthening relations between the two countries since age 50. Most likely including the continuation of their shark finning agreement.

Later, Lee gave a banquet for Chinchilla and his entourage.At dinner, where he served as Costa Rican coffee and patriotic songs performed, the host provided by the development and friendship between the two nations. (I would not be surprised if Shark Fin Soup was served)

Meanwhile, Chinchilla thanked the hospitality during his visit, which he described as “fruitful and enjoyable.”

Chinchilla closes and a tour that began on August 12 in China, where he met with President Hu Jintao and other leaders of that country. The president flies early Wednesday to San Jose.

This trip for Chinchilla should have been called the Sale of Costa Rica to the Asian Shark Finning Empire Trip or The Death of Environmental Protection in Costa Rica Trip.

Discount For Having The Best Butt In The Restaurant

Thousands Line Up in Nicaraguan Embassy in Costa Rica

Dan, You wonder IF we can see this so clearly. Why does the rest of the Costarricenses here do not see this and the world. I guess CR is green because it has trees and banana plants! The only green here is the hundred dollar bills stuffed in the ministers pockets. So did Lady Laura cry poor mouth and get a hand out?? She will come back and tell everyone how important the trip was and all the money she raked in over the past 2 weeks. Unfortunately, the marine life all around here is in danger and soon wiped out.