World News – Most of us have seen the movie The Waterboy with Adam Sandler…..or make that most of u under the age of 40 have seen this movie. Bobby Boucher’s mother tells Bobby the entire movie that all thins she does not want him to do “are the devil”.  Did you ever think you would hear someone use this is real life?

Fornicators beware: sodomy, condoms and pornography are the work of the devil.

That’s the message of a speech posted online last week by the Catholic Archbishop of St. Paul and Minnesota, John C. Niendstedt. A controversial religious leader with a stridently anti-gay stance, Niendstedt originally made the comments while speaking to the conservative Napa Institute Conference on August 2. The speech detailed the importance of family, as well as the devil’s multiple attempts to weaken the institution of heterosexual marriage. 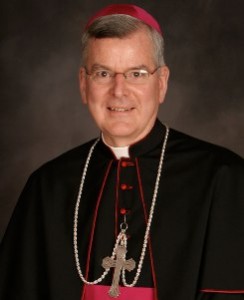 “Today, many evil forces have set their sights on the dissolution of marriage and the debasing of family life,” Niendstedt said. “Sodomy, abortion, contraception, pornography, the redefinition of marriage, and the denial of objective truth are just some of the forces threatening the stability of our civilization. The source of these machinations is none other than the Father of Lies. Satan knows all too well the value that the family contributes to the fabric of a good solid society, as well as the future of God’s work on earth.”

Voted Minneapolis blog City Pages’ Best Villain of the Twin Cities in 2013, Niendstedt has “used his position to bully proponents and demonize fellow Catholics who disagreed with him,” wrote the blog’s Jesse Marx. “He donated more than $650,000 of church money to the anti-gay-marriage cause.”

In October of 2012, Niendstedt found himself at the center of a similar controversy when a letter he wrote surfaced in which he tells the mother a young gay man that she must reject her son or go to hell herself.

“I write to inform you that the teaching of the Catholic Church on homosexuality, as described in paragraphs 2357 and 2358 and 2359 of the Catechism of the Catholic Church is rooted in Scripture and based on the Natural Moral Law,” Niendstedt wrote, according to ThinkProgress. “Catholics are bound in conscience to believe this teaching. Those who do not cannot consider themselves to be Catholic and ought not to participate in the sacramental life of the Church… Your eternal salvation may well depend upon a conversation of heart on this topic.”

The Huffington Post  |  By Meredith Bennett-Smith, Edited by Dan Stevens

CR to Prove if Carbon Credit Program is Legit