The Reason for Crappy Driving in Costa Rica?

Costa Rica News – Costa Rica has recently instated a driving test that is required to be passed before obtaining a drivers license.  It seems that the results from this test might provide insight into why there are so many vehicular accidents and why driving in Costa Rica can be both dangerous and nerve racking. 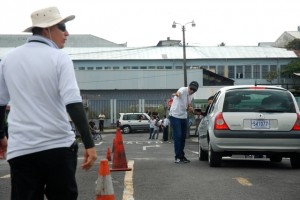 Since the implementation of the test, 7 out of 10 people taking the test have failed it.

The evaluation seems to bring out the fears and doubts of the test takers. They demonstrate shaking hands on the steering wheels, knocking over cones, being unable to reverse and in some cases actually hitting the person issuing the test.

Many of the failed students state that hitting the evaluator was just bad luck……..good so if they run over a child playing in the street it will be considered, “bad luck”.

Some of the people taking the test have failed it up to 15 times.

You may be thinking to yourself, “I am sure that failure rates are like that everywhere.” No not really.

But Is there Another Side? Like everything we also need to throw out there that the driving test and the people running it abusing the power to put more money if their pockets.

During the first quarter of this year, of the 32,748 people who took the exam, only 10,668 passed it, according to Rafael Fallas, deputy Driver’s Education. That’s right an about 65% failure rate.

That represent a lot of money that is going back into the system for failures……it would be interesting to do an audit on so many parts of the Costa Rican government.

Although many of these driver’s education students seem to get nervous when taking the test and that leads to failure.  Some of the students are saying that the test and its evaluators are too strict.

There are 2 sides of each story with the truth hidden somewhere in between.

And World War III Will Be Started by….Israel

Only in Costa Rica for Week of May 6th