The Real Ruler of CR Coming in June (China)

Costa Rica News – For all of us that have not head our heads buried in the sand nor had our visions blurred by the smoke and mirrors that the Costa Rica government throws out to try to hide the truth, we can see that China is slowly buying the soul of Costa Rica. 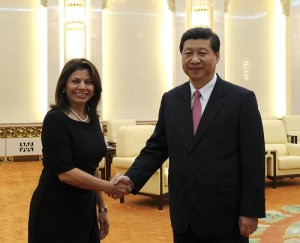 The new national stadium in Costa Rica.  The millions of dollars in “no strings attached loans”. The new cars for the police force that have since mostly broken down.  According to the Costa Rican government these are just gifts and China does not expect anything in return.  There is one difference between this and the Greeks bringing the Trojan horse…..the Costa Rican government is in on it and expects the entire local population to believe otherwise……it’s not working.

Chinese President Xi Jinping visit Costa Rica in June as part of a Latin American tour that could also lead to Venezuela and Mexico.

Jinping, who came to power on March 14 of this year is trying to place China as a first world power. The objective is to form alliances with Latin America and Africa, which are producers of raw materials.

The Chinese leader has already made ​​a tour of the African continent to promote investment and cooperation with countries such as Tanzania and South Africa. He also met with the leaders of the BRIC (Brazil, Russia, India and South Africa) to promote projects such as creating a development bank .

Other challenges that will face Jinping, in the ten years that will remain as head of the Asian giant, are to maintain high rates of GDP growth (9.2% in 2011) and tackle corruption scandals living the Communist Party of China (CPC).

I am sure that Costa Rica will roll out the red carpet (pun intended) and eat shark fin soup with him behind closed doors.

I wonder if Lady Laura will be selecting her villa in Spain with the Costa Rica’s real behind the scenes ruler? If she needs a private jet to head to weddings and funerals, I am sure a little more access to the Costa Rican waters should do the trick.