The New Google Maps Is On The Horizon

World Technology News – In the race to keep Google Maps ahead of the pack, Google has packed its popular navigation app with 3D tours, preference learning and other features that keep it one step ahead of competitors like Apple Maps and Yahoo Maps. The company announced the updates to Google Maps during the keynote speech at Google’s annual I/O conference in San Francisco on Wednesday. 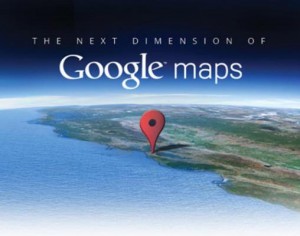 Perhaps most notably, Google Maps will make it easier to do what maps are supposed to do: help you get from point A to point B. On the new Google Maps, you will be able to compare many different modes of transportation at once. Unlike the previous iteration of Google Maps, all results are labeled directly on the map, and the top places have a short description. More detailed information on public transportation has also been included.

Maps will also learn your preferences as you use it. As you give it information (favorite places, ratings, etc.), Maps will adjust to your likes and dislikes. It will even make suggestions for the quickest routes home and places you might like. You can search for just places your friends have reviewed and can add important places as permanent landmarks on your map.

One of the most impressive new features is Google Maps’ integration with Google Earth. You will be able to see 3D “photo tours” of different places all over the world. You can also make your own panoramas or “photo spheres” and add them to Maps. Satellite images also allow you to watch the Earth from space in real time, which is quite beautiful.

Brian McClendon, a vice president at Google who spoke at I/O, drove home the point that Google Maps is the leader of the digital mapping business. After the recent addition of North Korea, 200 countries have now been mapped by Google, while 50 nations are on Google Street View. There are 1 million websites using Google Maps, which are visited by over 1 billion people every week.

You can request an invite to the new Google Maps here.