The Mind Is a Terrible Thing to Baste

Do our conceptions of the mind determine emotional states, or even influence them to any significant degree? Or is the globalizing culture, manifesting through family, friends and oneself, much more responsible for the rampant anxiety and anomie we see and experience in America

One opinion writer, a professor of anthropology at Stanford no less, believes that “the way we think about the mind—-as an interior place that demands careful, constant attention”—is what is causing much of the high anxiety we experience in the United States

She traces our present disquiet back to “the sharp awareness of mind as a possession, distinct from soul and body, which comes from the Enlightenment.” Pushing obtuseness even further, this national writer claims that the notion that “personal thoughts and feelings are the central drivers of human action — not roles, not values, not personal sensation, not God” is the source of much of our anxiety.

Aren’t personal sensations, roles, values and ideas of God also personal? Doesn’t it all add up to a culture of individualism, competitiveness and comparison? It’s sadly ironic that an anthropologist at a leading American university apparently doesn’t see the culture clearly at all.

One would expect a cultural anthropologist to take an inter-cultural view of the mind, to maintain that how we view our minds, as determined by the culture in which we happen to have been raised, largely determines our emotional states.

However the global spread of the individualistic American mind-set is the issue, not archaic Enlightenment notions of separation of mind and body, however embedded in our mind they may be. Besides, psychological separation is universal; it just takes different forms.

Is the author trying to make a subtle, if not sneaky case against self-knowing, as well as uphold the idea that we cannot observe the mind free of our cultural and historical backgrounds? It appears so, and both implicit claims are egregiously false.

Cultural relativists argue against the claim that there are universal insights into the human mind applicable to all people. Even without the homogenization of globalization (largely ignored by believers in so-called diversity), the premise of particularity has been washed away by the fact of sameness.

Linking the Cartesian separation of mind and body in a derogatory way with the idea of the mind as “an interior place that demands careful, constant attention” is at best confused, at worst intellectually dishonest.

Academic conceptions of the mind prevent observing the movement of the mind directly. Self-knowing does not depend on or arise from “the way this mind is imagined.” The human mind is a not just a cultural construct. Essentially, there is no Western or Eastern, Christian or Islamic mind, just the human mind.

To be self-knowing simply means to be honestly and skeptically aware of what one is doing, thinking and feeling in the moment. It does not presuppose separateness, much less “the sharp awareness of the mind as a possession.” Indeed, those orientations prevent self-knowing, because they continually beg the question: who or what is doing the observing, and possessing?

This is why gaining an insight into the illusory separateness of the self and observer is crucial. One cannot observe oneself accurately if one believes and acts as if there is an ‘I’ that’s doing the observing.

The immense isolation generated by post-modern individualism, which is a much wider and deeper socialization than 18th century Enlightenment ideas of the human mind, is the source of much more anxiety than any conscious or subconscious conception of the mind.

Inherent in the culture of individualism is not only personal competition, but also relentless comparison. And comparing oneself to others is not only 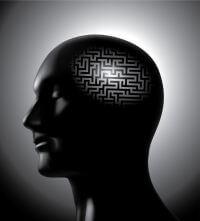 false on the face of it—denying one’s capacity to grow independently as the person one is—it unavoidably generates enormous anxiety.

As the New York Times recently reported, “anxiety and depression, in that order, are now the most common mental health diagnoses among college students.”

“Female students feel pressure to be “effortlessly perfect”: smart, accomplished, fit, beautiful and popular, all without visible effort. At Stanford, it’s called the Duck Syndrome, because a duck appears to glide calmly across the water, while beneath the surface it frantically, relentlessly paddles.”

When the pressure to conform is added to hyper-individualism’s pressure of competition and comparison, it’s no wonder anxiety and depression are rampant among young people in America

So anxiety doesn’t stem primarily, or even secondarily, from our conception of the mind, as purblind anthropologists would have us believe, but from the dominance of psychological thought of any and all cultures.

A mind quieted and emptied of psychological thought through undivided, undirected attention to its movement in the present is the true mind.