Costa Rica Entertainment News – The music festival scene has evolved from simply a form entertainment to a cultural movement. The fifth annual Envision festival is an eco-conscious and spiritual gathering complete with international music and performance acts, yoga, workshops, waterfalls, surfing, jungle exploration and beyond. It is not about hedonism but rather about an appreciation for humanity and the planet that houses us. Just like Burning Man, Envision began as a humble backyard boogie and in just four years has grown into an epic gathering of artists and travelers from around the globe. 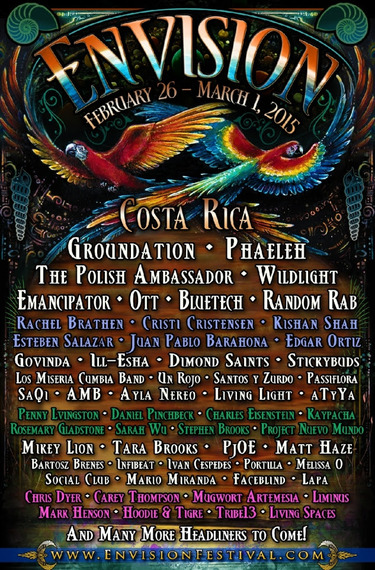 In addition to being a microcosm of art, music and enlightenment, the unique setting is what makes Envision shine above the average music festival. This gathering will take place where beach meets forest in the jungle of Uvita, an adventurer’s paradise. Offering a tropical backdrop to an already beautiful experience, this festival attracts humans from all walks of life. Dancing on sand, splashing in the ocean, jungle camping, exploring vegetation, jumping off waterfalls, and all while enjoying beats from your favorite musicians sounds like an inconceivable utopia made real.

Massive community gatherings are reigniting and redefining humanity. We are not just brought together to enjoy but to change. Music has always been a powerful, non-violent weapon used to convey truths, change perspectives and start revolutions. Artists such as Fela Kuti and The Beatles have created social change and awareness through their music. If one singular musician can achieve this, imagine what a gathering of musicians can do. The human race is most powerful in numbers, especially when sharing a collective consciousness. While many popular music festivals are seen merely as indulgent parties for the youth counter-culture, Envision is the festival of the future, combining the power of human creation with the majesty of the Costa Rican landscape. While good times, partying, and mind expansion are inevitable, these are not the roots of this festival but the flowers that grow from its fertile soil.

Every music festival has something different to offer. Whether it is the desert landscape and all-star lineup of Coachella or the transformative experience of Lightning in a Bottle, each festival has one underlying objective: to gather. Swallowed by a world of 50 hour work weeks, capitalism and processed food, music festivals give us the chance to escape it all and see life through a kaleidoscope for a few days. It is as much indulgent as it is healing, reminding us all that we can all just get along. While religion unites many countries and cultures, so now does music.