As William Faulkner wrote, “The past isn’t dead. It isn’t even past.” But blaming others, personally or collectively, for real or imagined injustices, perpetuates dependency. Indeed, prolonging a feeling of victimization, especially if one has been a victim of injustice, increases dependency.

Conquest, subjugation and assimilation have been the way of man for thousands of years. It’s only quite recently that people began to think in terms of fixed identities of nation and place. Not so long ago, entire peoples were wiped out or absorbed into expanding empires, and that was thought to be normal and fitting.

For example, take the phrase “white man’s burden,” which has become so understandably derogatory in Africa. It comes from Rudyard Kipling’s poem by the same name, exhorting American empire under the subtitle, “The United States and the Philippine Islands.”

To present-day sensibilities, the poem reads like parody. It’s hard to believe that people really believed this stuff at one time, and gave their lives for it: “Take up the White Man’s burden, Send forth the best ye breed/ Go bind your sons to exile, to serve your captives’ need.”

It’s impossible to know where Kipling was really coming from, or for that matter Teddy Roosevelt and all the other imperialists of the time. Is it satire or self-pity when Kipling intones, “And when your goal is nearest The end for others sought,/ Watch sloth and heathen Folly Bring all your hopes to nought.”

Whatever Kipling’s British Empire bred contradictions, we know how things turned out in India and Africa for the colonized, and in Europe for the colonizers. Europe’s tiny competing nation-states uprooted and carved up indigenous peoples with abandon from the 17th to the 19th centuries, and then turned on themselves in the 20th.

They left a generation of their best and brightest young men dead in the trenches in the First World War, and tens of millions men, women and children indiscriminately killed in the Second World War. (Europe finally learned some lessons, and began to integrate, while America still pats itself on the back for saving the world, while whitewashing Dresden and Hiroshima.)

Colonization is not a one size fits all Europeans label however. The Irish, as fair-skinned and light-eyed as any Nordic types, rightly see themselves as having been colonized by the British. Just as many African nations struggle with ‘dependency syndrome’ and have yet to stand on their own two feet, so too Ireland, for all its recent Republican fervor, has been all to willing to follow the economic fads from the States and swallow the supposed remedies from the Continent.

There certainly are different visions of what it means to be human, but when they are put in competition with each 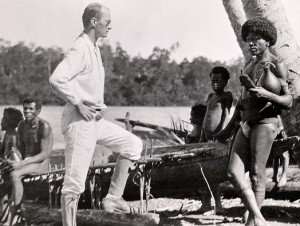 other, we have what we have in the world today—a race to the bottom. The notion, in a global society, of adhering to a traditional European, Asian, or African vision of what it means to be human is worse than inane; it is divisive, dark and ultimately evil.

The world is not worth saving, nor even is man. But the essence of the earth and humanity has to be safeguarded for the future, or we will be lost as a sentient, potentially sapient species. That is not the ‘white man’s burden’ but the black, white, brown, yellow and red man’s responsibility.

Can the revolution in human consciousness as a whole that changes the course of humankind ignite now? Perhaps the gods don’t even know, but if not, enough living, inwardly growing human beings have to survive for a future generation to ignite it.

Whenever the breakthrough occurs, it will be a true phenomenon, not a gradual process, which everyone, even the dullest and densest, won’t be able to deny.

Though global in nature, wherever the breakthrough occurs, it will be like Krakatoa, the 19th century Indonesian volcano that was almost literally heard around the world. (If Krakatoa had erupted in New York, it would have been heard loudly in San Francisco!)

This isn’t romanticism, but the way great changes in nature occur and have always occurred. I don’t believe in ‘Messiahs’ in any sense. All one can do day to day is contribute to the work of transmutation that true human beings have contributed to, consciously or sub-consciously, for thousands of years.

One of my favorite poems is Byron’s last, written in Greece a few weeks before his death.

“The fire that on my bosom preys
Is lone as some volcanic isle;
No torch is kindled at its blaze—
A funeral pile.”

Many, perhaps all passionate people of insight throughout human history have felt this way. As grim as that must sound to most people, this poem ends on an exalted note, giving strength and solace.

“Awake my spirit! Think through whom
Thy life-blood tracks its parent lake,
And then strike home!”

The Broken Road – Redefining Myself & Success