The Holy Grail & Other Legends

Ghosts & The Supernatural – The Holy Grail is a relic of the highest heavenly realms. It is an ancient and legendary object of mortal desire. The legends have their roots in some cultures such as Christianity, Celtic and Spanish.
The Holy Grail in Christianity is thought to be the cup that Jesus drank from during the last supper. The last supper is the last ceremonial meal that Jesus ate with his disciples before he was crucified.

Jesus was crucified because he was a rebel. He wasn’t following the government or the churches of Rome. He was saying that there was only one God and romans believed that there were multiple gods.

King Arthur is a legend about a noble boy who pulls a sword from a stone and becomes king. This is an English tale. King Arthur was described as having found the holy grail with his companion. Yet, it was said that it lifted up into the heavens.
The common theme with the Holy Grail is immortality. One who drinks from this cup would live forever. Other versions of the Holy Grail have been suggested because it is also known as something that many people lust for.

If immortality is the ultimate prize from the land of the living than it must be hard to get into Heaven. In the case of King Arthur, It just magically appeared and disappeared. Perhaps it will show itself when it is ready, and the one who grabs it may become like a God.

The grail itself is possibly also a representation of alchemy. Have you ever noticed the magician holding the chalice? He is commonly depicted in tarot cards which are magical cards used for fortune telling.

Alchemy is creation through chemistry. The Alchemist really became known through King Solomon, Merlin and King Midas. These magicians were turning away the basic D.N.A. structure of one thing to make it another.

The chalice itself is used in witchcraft. There is an item to represent each element that is worshipped in nature. The wand, pentacle, sword and chalice. The wand for air, the pentacle for earth, the sword for fire and the chalice for water. In ceremonies invokeing these elements is necessary.What is drank from the chalice is a symbol for the womb of the goddess. 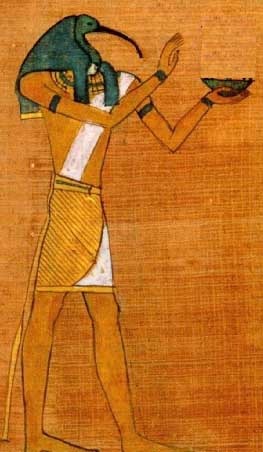 In this century we know that there is many more elements than just those four. A fifth element is also present in recent rituals: spirit. Spirit is said to represent the essence of ourselves, our world, and our deeds. Yet this element cannot be found in the periodic table of elements.

In Egyptian folklore we come across the Book of Thoth. This is a book holding mysterious and super spells. The person who finds this book and reads it properly will receive powers of immortality.
The book was said to be created by Thoth, the God of wisdom. His head is shaped as a bird.

The first part of the book contains basic alchemy and the second part contains instructions and knowledge on the quest for immortality.

The Hermetica is a Egyptian-Greek text in which discussions taught by Hermes Trismegistus talks about the divine, the cosmos, alchemy and astronomy. Basic principles of chemistry are said to come from this such as macro and microorganisms. Ideas such as reincarnation and creation are discussed.

The Jade Books of Heaven are legendary books that keep everything in divine order. They exist in the heavenly realms. Inside them are written basic destinies for the spirits on the Earth for example; The Buddha’s, the goddesses and knowledge of Heaven. They are said to be inscribed on precious stone.

Magic is the illusion of the unknown. Everything we need to know about our world we can find inside of ourselves. Our ancestors had the same hearts, minds and souls that we inherited. The greatest magic in the world is said to be the magic of the immortal. Once bestowed with the power of immortality, what force will you battle eternally?