Costa Rica News – A COMMITMENT TO create a marine protected area around Cocos Island fell through, though the country’s new government may take another look.

Political leaders should be accountable for their commitments, said Enric Sala, a National Geographic Explorer-in-Residence who has worked with Costa Rican officials for a number of years on ocean conservation. The proposed marine protected area (MPA) would have benefited Costa Rican fishers in the long term, but local fishing interests threatened to shut down ports and Solís backed down, said Sala.

However, there is hope the country’s new government will chart a different course. In a recent meeting at National Geographic Society’s offices in Washington, newly elected Costa Rican President Carlos Alvarado and Minister of Environment Carlos Manuel Rodriguez indicated that they want to add five new MPAs, said Sala.

Costa Rica has a longstanding reputation as a conservation and environmental leader on land, but barely one percent of its marine Exclusive Economic Zone (EEZ) is fully protected—despite an international commitment to expand this to 10 percent by 2020.

Cocos Island, said to be the inspiration for the jungle island in the movie Jurassic Park, is the only visible part of an undersea mountain range rising 5,000 feet from the sea floor. The island is made of black volcanic rock with steep cliffs and is draped in waterfalls and lush vegetation, including the only cloud forest on an island in the East Pacific.

“Cocos Island is one of the most amazing places in the world,” said Sala.

Slipping under water around Cocos is like travelling back in time 400 or 500 years, he said. A time when the oceans were filled with an astonishing variety and abundance of creatures, including „sea monsters,“ such as 60-foot whale sharks and giant manta rays 20 feet across. Only accessible by a 35-hour boat trip, this remote location—combined with nutrient-rich currents colliding with the undersea mountains—has large populations of ocean predators, especially sharks like hammerheads.

This makes Cocos a top destination for diving—but also for fishing fleets. The region’s remoteness makes it hard to prevent illegal fishing there. And even legal fishing can spill into the restricted zone or harm nontarget wildlife in the area. Longline fishing uses a main line that can stretch 30 miles or more, with as many as 12,000 baited hooks hanging down from branch lines of various lengths. The no-fishing zone around Cocos is small, at 12 nautical miles in diameter, and longlines often drift well inside its boundaries—catching not only sharks and tuna but also snagging turtles, seabirds, and dozens of other non-target species. 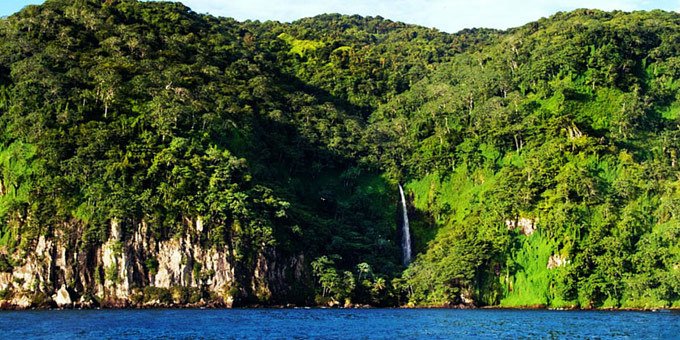 These data, combined with other sources, reveal excessive fishing pressure in Costa Rica’s EEZ, mainly by foreign fleets, much of which is illegal, according to a new report (only in Spanish) prepared for Faico.

The report authors also could not find a single record of a boarding or detention of an industrial fishing vessel, domestic or foreign, between January 2012 and July 2017.

Improving enforcement and reducing illegal fishing could benefit the local fleet, which could switch from shark finning to catching tuna using more sustainable methods than longlines, says Uribe. The expansion of the Cocos MPA banning fishing would increase the quantities of fish outside the area in what’s known as a spillover effect.

The Holy Grail & Other Legends