Ghosts & The Supernatural – I have always been fascinated with the event that happened on February 2, 1959. The event is known at the Dyatlov Pass Incident. I had the pleasure of interviewing Anton Bogdanov of Moscow, Russia, who had his own experience at Dyatlov Pass. But first, let me give you a quick briefing on what occurred there in February 2, 1959. 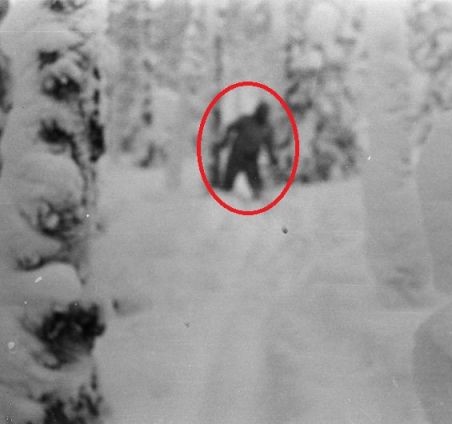 9 ski hikers lead by Igor Dyatlov were camping in the Ural Mountains. All 9 ski hikers were scared to death by something unknown. They were so scared, that they cut slits from the inside of their tents to look at whatever was out there tormenting them. During the time that Igor and his team were camping in the Ural Mountains, the temperatures were sub-zero, but for some reason these professional well-seasoned ski hikers ran out of their tents in fear, not appropriately dressed, either running in their bare feet or with socks on. When they were found, they were all dead, frozen stiff from the ice cold elements. Some had chest fractures. Some had fractured skulls or cracks in their skulls. One had severe brain damage. One female ski hiker was missing her tongue.

Photographs were taken by the ski hiking party and on one photo there appears to be an odd primate in the woods staring back at them. Could this be Yeti? There are rumors that a Russian missile exploded in the Ural Mountains when the ski hikers were camping and there are rumors that there were orange globes hovering over the area. Theories are thrown out that the explosion of the Russian missile caused a Yeti to panic. The panic turned to rage and the Yeti killed the ski hikers. Many UFO witnesses say that UFOs are associated with Bigfoot or Sasquatch. When UFOs are seen, then Bigfoot is seen. Or when Bigfoot is seen, UFOs are seen. Are Bigfoot, Sasquatch and Yeti the experiments of extraterrestrials? Were the orange globes observing the behavior of one of their creations, the Yeti?

I can only wonder if Anton and his friends were a threat to the Yeti that they saw, would that Yeti act out violently if she thought her cubs were being threatened? I assume that the large Yeti was the mother to the 2 smaller Yetis.

Anton claims that the larger Yeti is about 7.5 feet tall. It appears that our American Bigfoot are about the same size, here is a report from 2009:

On June 22, 2009, 6:30 p.m., a 19-year-old college student was driving on a curvy back road near Rhinebeck, N.Y., on the way to a rehearsal at a nearby performing arts center, according to the BFRO report. As he swerved to miss an object on the road — a shopping bag containing, oddly, an open cereal box and a small log — he glanced in his rearview mirror and saw someone or something darting behind his car, apparently to retrieve the bag.

A moment later, the student stopped and turned his car around, and got a three-to-four second glimpse of “something walking on two feet” about 50 feet away. He described the creature, which he saw from the rear and side profile, as being between 7 and 7.5 feet tall, covered with black hair, and possessing broad, muscular shoulders with arms that swung in an exaggerated fashion and palms that faced upwards. The witness recalled that he felt “nervous, confused, and excited at the same time” during his brief encounter.

Could it be that Yeti and Bigfoot are one and the same? Perhaps when there was an ice bridge connecting Siberia to Alaska, Yeti crossed over into the Americas and became Bigfoot, Sasquatch? Yeti, Bigfoot and Sasquatch all look the same, there are only small variations to their looks, that separate each creature. They are definitely close cousins. Many people ask the following question: “If Bigfoot is real, how come we can’t find proof of Bigfoot?” My answer: I believe Bigfoot and his numerous cousins throughout the world are interdimensional creatures. One hunter claims he shot a Bigfoot and it exploded into sparks. If this is true, that tells me that this creature can transform from matter to energy and back to matter. At Skinwalker Ranch, a scientist saw a Bigfoot type of creature come out of a portal in the sky. I definitely believe that extraterrestrials are responsible for the creation of Bigfoot and that is why many witnesses have seen Bigfoot with UFOs or UFOs with Bigfoot. There is a close association between these two paranormal anomalies.

There are many mysteries of the universe and Yeti, Bigfoot and Sasquatch is just one of those mysteries.

Sitting Can Kill You