Sitting Can Kill You

Health News – Evidence is building that sitting for too long can cause heart disease and diabetes — even in people who exercise, the American Heart Association said Monday. 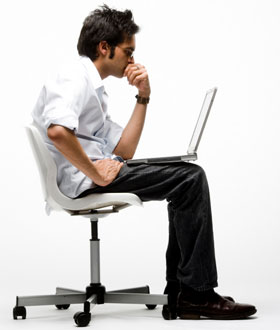 The trouble is, it’s hard to measure just how inactive people are and there’s not enough evidence yet to show just how much, or how often, you have to exercise to counteract the effects of sitting, the group said in a scientific update.

In the meantime, then, people should try to sit less and move more, the heart association’s team of experts advised.

“The evidence to date is suggestive, but not conclusive, that sedentary behavior contributes to cardiovascular disease and diabetes risk,” a team led by Deborah Rohm Young, of Kaiser Permanente, Southern California wrote.

“Given the current state of the science on sedentary behavior and in the absence of sufficient data to recommend quantitative guidelines, it is appropriate to promote the advisory, ‘Sit less, move more’.”

At least 30 minutes a day of moderate exercise — walking briskly rather than strolling around the house – should be the minimum goal, they advise.

And it may be worthwhile to encourage desk-bound workers to get up and move a bit every hour or so.

Yet even this may not outweigh the effects of sitting at a computer all day, driving home in a car, and then relaxing in front of the TV or with a tablet computer.

“Regardless of how much physical activity someone gets, prolonged sedentary time could negatively impact the health of your heart and blood vessels,” Young said in a statement.

“There are many important factors we don’t understand about sedentary time yet. The types of studies available identify trends but don’t prove cause and effects,” she added.

They did define sedentary behaviors: They include sitting, reclining, or lying down while awake as well as reading, watching television or working on the computer. Light housework or slow, leisurely walking doesn’t rise to the level of moderate to vigorous physical activity.

“Based on existing evidence, we found that U.S. adults are sedentary for about six to eight hours a day,” Young said. “Adults 60 years and older spend between 8.5 — 9.6 hours a day in sedentary time.”

The researchers cited a study that showed half of all jobs required some sort of activity in the 1960s, but now fewer than 20 percent do.

“There are clearly physiological changes that occur when physically active individuals become inactive,” Young’s team wrote in the journal Circulation. This includes changes in the way the body uses insulin to convert food efficiently to glucose that the body can use.

“Despite these potentially relevant findings on how physical inactivity can be associated with biological dysregulation, we do not have direct evidence that this leads to cardiovascular disease.”

Nicaragua Arming Itself, But For What?