Travel News – Nasty weather headed toward the East Coast threatens to dampen holiday spirits as millions of Americans are hitting the road for Thanksgiving.  The National Weather Service is reporting that heavy rains and high winds are expected to increase on Tuesday and Wednesday morning. Snow is expected in Washington, D.C., Baltimore, New York and parts of western Pennsylvania.  The storm has already caused major problems in parts of the southwest and south, and hundreds of flights have been cancelled. 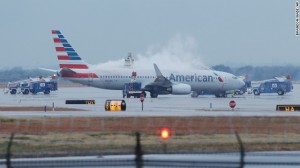 If it looks like the bad weather may be derailing your best laid holiday travel plans, here are some tips for rebooking flights and getting last-minute hotel rooms:

– Delta, JetBlue, United, American Airlines and US Airways will be waiving change fees for passengers flying to or from one of the affected regions during the storm. Delta is allowing a one-time free ticket change for any traveling to and from New York City, Washington, D.C., Boston, Baltimore and other airports in the East  even if your flight isn’t delayed or canceled. JetBlue is waiving change fees as well. Anyone flying to or from Dallas/Fort Worth on Nov. 24 or 25 won’t have to pay change fees after an ice storm hit the area.  The best bet is to check with your airline before updating your itinerary.

– Use apps like HotelTonight and Priceline to find last-minute hotel discounts for that night. Warning: Many of the rooms are non-refundable when booked through a third-party.

– If you miss your flight connection — or bad weather causes delays — get in line to speak to a customer service representative. But also, call the airline directly. If the phone lines are jammed, try the airline’s overseas numbers. You’ll pay long-distance rates, but might not have to wait. (Add those numbers to your phone now.)  Finally, consider sending a tweet directly to the airline explaining your problem.

– Consider buying a one-day pass to the airline lounge. There are usually free drinks and light snacks. But the real secret to the lounges is that the airline staffs them with some of its best — and friendliest — ticket agents. The lines are shorter and these agents are magically able to find empty seats. One-day passes typically cost $50 but discounts can sometimes be found in advance online.