World News – What is wrong with people in the world. On what planet would the cartoon depicting the explosion in Texas be considered appropriate? People were killed in this explosion and this lack of class needs to be reprimanded. Governor Rick Perry thinks the same thing. 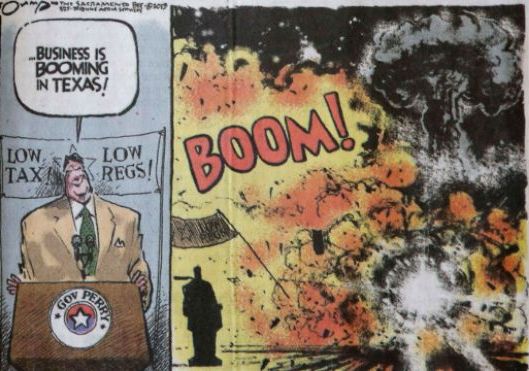 Gov. Rick Perry said Friday he’s disgusted a California newspaper ran a cartoon that depicts him boasting about booming business in Texas, then shows an explosion, a week after a fertilizer plant explosion killed 14 people in a Texas town.

Perry said he wants an apology from the Sacramento Bee on behalf of the town.

The cartoon in Thursday’s edition shows Perry crowing that “Business is Booming,” flanked by signs saying “Low Tax!” and “`Low Regs!” It’s a play on the Republican’s often-repeated mantra that his state’s low-regulation, business-friendly climate has its economy humming.

The next panel reads “Boom!” as a blast engulfs the area behind the governor and his signs.

An April 17 explosion in the town of West, which is outside Waco, left a crater more than 90 feet wide and is estimated to have caused more than $100 million in damage. The blast occurred moments after a fire was reported at the West Fertilizer plant.

Ten of the people killed were first responders who rushed to the nighttime blaze.

In a letter to the Bee’s editor, Perry said it “was with extreme disgust and disappointment I viewed your recent cartoon.”

“While I will always welcome healthy policy debate, I won’t stand for someone mocking the tragic deaths of my fellow Texans and our fellow Americans,” Perry wrote. “Additionally, publishing this on the very day our state and nation 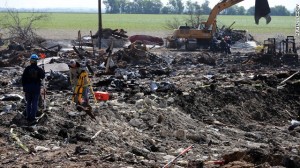 paused to honor and mourn those who died only compounds the pain and suffering of the many Texans who lost family and friends in this disaster.”

President Barack Obama was among those who attended a memorial service for the explosion victims Thursday at Baylor University in Waco.

The Bee’s editorial page editor, Stuart Leavenworth, responded Friday that the artist, Jack Ohman, “made a strong statement about Gov. Rick Perry’s disregard for worker safety, and his attempts to market Texas a place where industries can thrive with few regulations.”

“It is unfortunate that Gov. Perry, and some on the blogosphere, have attempted to interpret the cartoon as being disrespectful for the victims of this tragedy,” Leavenworth said. “As Ohman has made clear on his blog, he has complete empathy for the victims and people living by the plant.

“What he finds offensive is a governor who would gamble with the lives of families by not pushing for the strongest safety regulations. Perry’s letter is an attempt to distract people from that message.”

Ohman defended his cartoon with an Internet post, noting that the fertilizer plant “had not been inspected by the state of Texas since 2006” and that many “Texas cities have little or no zoning, resulting in homes being permitted next to sparely inspected businesses that store explosive chemicals.”

“My job, as I understand it, is to be provocative,” Ohman wrote. “I provoke, you decide. I don’t dictate, I put out my opinion along with everyone else. I sign my name. I own it. In my opinion, I could have gone further. Much further.”

California has seen Perry’s touting of his state’s pro-business prowess firsthand. In February, a public-private Texas marketing firm ran radio ads featuring Perry denigrating California’s taxes and regulation, and then Perry traveled there to recruit jobs. He made a similar trip — this time backed by a print-media ad buy — to Chicago this past week.

“I think it’s reprehensible for a member of the media to sit in safety and mock such a profound tragedy regardless of any `point’ he is trying to make,” Dewhurst said.

Perry, meanwhile, wrote that the newspaper “owes the community of West, Texas, an immediate apology for your detestable attempt at satire.”

Ohman posted that he had received “varying levels of concern about the cartoon depicting Gov. Rick Perry’s marketing of Texas’ loose regulations, juxtaposed with the explosion of the fertilizer plant in West, Texas,” but that he would draw the cartoon again without thinking twice.