World News – “You Belong. Stay Strong. Be Blessed. We Are One America,” read the sign that 53-year-old Justin Normand held outside the Islamic Center of Irving near Dallas — a photo of which has gone viral since it was posted online last Saturday. 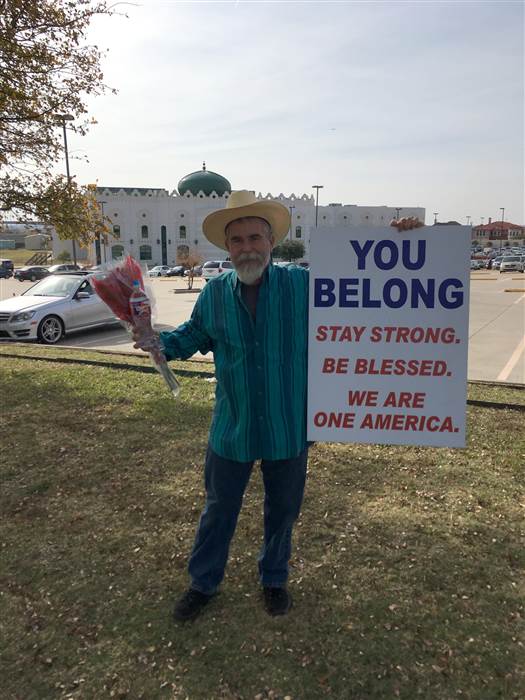 Since the election, Normand and his husband Gary Cathey, who are both practicing Presbyterians in their church, have been looking for a way to show some compassion and unity with their neighbors.

“I have been in a malaise and at a loss since Election Day,” Normand posted on Facebook in a response to the photo going viral. “What to do? With myself? With my time? To make things better, or even just to slog through?”

But Normand didn’t just slog through. On a Friday afternoon last week he decided to make a sign, drive to the nearest mosque, and stand on the public sidewalk. He turned his sign towards the mosque.

“This was about binding up the wounded. About showing compassion and empathy for the hurting and fearful among us. Or, in some Christian traditions, this was about washing my brother’s feet,” explained Normand in a post liked over 75,000 times on Facebook.

Cathey said his husband was fully committed to sending a strong message of support for those that are feeling vulnerable following a contentious presidential election cycle. The FBI recently said that there was an increase of 67% in hate crimes against Muslim Americans in their annual hate crime report.

“He wanted to pass a message to a group he felt was targeted,” Cathey said.

Attorney General Loretta Lynch said in a video statement Nov. 18 that the FBI was investigating a rash of hate crime reports across the nation following the elections.

“I know that many Americans are concerned by a spate of recent news reports about alleged hate crimes and harassment. Some of these incidents have happened in schools. Others have targeted houses of worship. And some have singled out individuals for attacks and intimidation,” she said. “The FBI is assessing, in conjunction with federal prosecutors, whether particular incidents constitute violations of federal law.”

Normand’s demonstration of compassion didn’t end at the Islamic Center of Irving. Fuad M. Dadabhoy, president of the Valley Ranch Islamic Center, said that Normand visited his center too and his actions show how to live your faith — whatever it may be.

“Given the heightened levels of anxiety that minority communities have felt recently, Justin’s small, and simple act of kindness has had a very positive impact on our congregation,” he said. “With the plethora of concerns amongst people, seeing a sign that shares such a beautiful message of unity reminds them of the hope that our faith teaches us.”

The viral onslaught began when an anonymous passerby snapped a photo of Justin that afternoon and posted it online Saturday morning. Normand had no idea the post had garnered such attention when he went back out to the Islamic Center of Irving on Saturday.

A woman walked up to him with an offering of flowers and asked, “Did you know that you’ve gone viral?”

Cathey was surprised by the reaction of the internet but insisted that the story was not about them, but rather the message that so many people responded to.

“It struck a chord with people who wanted to hear a positive message,” he said. “This was in the heart of a lot of people and we are really humbled.”