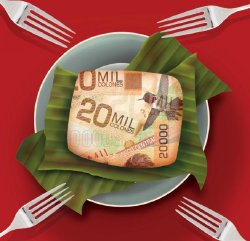 It’s December and it’s ‘Aguinaldo’ time, the year-end employee “holiday” bonus. For many not familiar with the ‘Aguinaldo’, the question of what is it and who must pay it quickly comes to mind.

he short answer is, the Aguinaldo is the 13th month salary paid to every salaried employee in the country, paid by every employer, government or private.

The Aguinaldo is the holy grail of bonuses, even paid to ‘undocumented’ employees, example maids and gardeners living and working illegally in Costa Rica.

The Aguinaldo is so important that the Ministry of Labour will intervene on behalf of an employee, legal or illegal, in cases where employers do not pay by the due the December 20 due date. An employer who fail to pay or enter into some arrangement with an employee faces stiff sanctions.

A typical scenario for expats living in Costa Rica is hiring a maid (domestica) or handyman (peon) for chores around the house, maybe only part-time (a few times a week or month) or full-time. No matter the case, there is the obligation and expectation of the Aguinaldo.

Fair to say that, if you have hired anyone during the year, even for only a week or a day, good chance they may come around knocking on your door, expecting their Aguinaldo.

The process of the Aguinaldo all starts on December 1, that in simple terms is average one months salary between December 1 the previous year and November 30 the current year.

The Central Government is a leader in paying the Aguinaldo, doing so usually in the first week of December.