World News – What would you do if you saw your dog burying one of it’s own puppies? I know that that scene if acted out on a stage would not leave a dry eye in the crowd.

A video posted to YouTube on Sunday (seen below), seemingly from somewhere in the Middle East, shows a dog coming upon a dead puppy and spending the next three minutes using its snout to completely bury it beneath the dirt. The clip already has more than 400,000 views and has been written up on the websites of the Huffington Post, USA Today, and Yahoo News, among others.

The burial has been described as both heart-wrenching and heartwarming, the act of a dog in mourning for one of its fellow creatures. The Christian Post calls the act “compassionate.” The Huffington Post labels it an “astounding act of mourning,” and suggests, “If you didn’t believe animals have the capability to grieve like people do, you might now change your mind.” 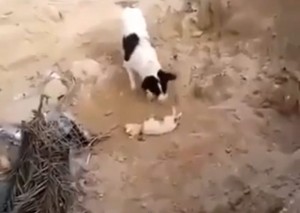 But an expert in animal behavior has a much less sentimental interpretation. Dogs, like many animals, will instinctively bury meat and bones for potential future consumption.

“I think that this is a classic case of really interesting behavior — sort of unusual that somebody actually caught it on video — and we make a big deal out of it, and it’s really cute and it sort of reminds us of some of the things we do,” Peter Borchelt, a New York animal-behavior consultant who has worked with the Museum of Natural History and was formerly the director of the Animal Behavior Clinic at the Animal Medical Center, tells Daily Intelligencer. “I suspect it was more likely just caching dead meat, rather than a soulful response to the demise of a puppy that it wanted to bury.”

By way of example, Borchelt says that if the dog had sat there for a long time with his paws folded, as if he was praying, it would be “ridiculous” to assume the dog was actually praying.

“We as humans look at that and say, ‘Oh my God, this dog is burying this animal like we bury people.’ Except they’re two entirely different behavior systems.”

This does not mean the the dog necessarily plans on coming back later to eat the dead puppy. “I wouldn’t want to go so far as to say that the dog is saving the puppy to eat for later, because that might not be the issue — it might not have the need. But it’s still a piece of this instinctive thing,” Borchelt says. “Here’s meat, here’s a bone — I’ll bury it.”

Still, if the dog finds itself desperate for food, Borchelt says it wouldn’t have any moral quandaries about cannibalizing its own kind. We guess it really is a dog-eat-dog world out there.

By Dan Amira, From nymag.com