At the end of last year I had the good fortune to get married to a Costa Rican and so have been through the slow and eccentric process of changing my residency status. This has involved three trips to Immigration, each one a learning experience and allowing me to provide some handy tips should you ever find yourself in the same predicament. 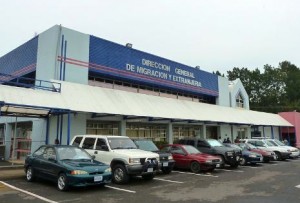 If you visit the Immigration website http://www.migracion.go.cr/ you will find all sorts of potentially useful information (only in Spanish) and a Call Center number for enquiries. If you ring it, this number is answered right away- and so it should be, since you are paying a premium of ₡125 a minute for the privilege. Sounds too good to be true? It is, as unfortunately, the friendly people on the other end of the line are ‘not employees of the Immigration Department and don’t know what they are talking about’ quote from an Official at Immigration on my second visit. Sadly, I found this out the hard way by following the advice given by the call center employee which was all wrong.

The Department of Immigration is located in La Uruca just off the autopista and opposite the Hospital Mexico. It is open to the public only in the mornings between 8am and 12.30pm (closed the last Friday of each month), but if you should be so foolish as to arrive just before 8am you will find yourself at the back of the queue that will likely be almost a hundred people long, so plan on arriving nearer to 7am if you want to save yourself an hour people watching.

The buildings are modern, open and airy like a school or college, and generally well sign-posted. If you know the right department to go to, that is half the battle. Most foreigners will be heading for the Plataforma de Servicios Extanjeras, which is by far the busiest section of the Immigration complex. Make sure you ask at least three people where you should go, the chances are one of them will be right.

On my first trip to Immigration I was trying to obtain a copy of my records, known as a Resolucion or Copia de Expediente. The first step is to go to the window marked ‘Copias’ as you enter the main complex; even though you think you are joining the photocopy line, these overworked guys do, in fact, hand out forms or Solicitudes for this, that and the other. The Solicitud de Copia de Expediente states that it requires to be presented along two stamps- one of 5 colones and one of 20 colones. You cannot buy these stamps in Immigracion, but they will direct you outside on the street to a red kiosk where the vendor will sell you cigarettes, soft drinks and postage stamps.

I returned to the Foreigners department and tried to figure out the queuing system for window #12. There is an 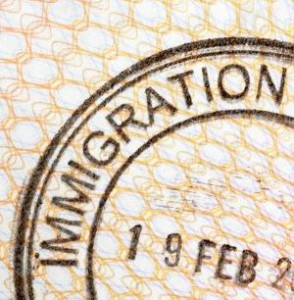 electronic counter but no familiar ticket dispenser. It seems they are broken or don’t exist, so someone told me you have to go up to the window and interrupt the official who will give you a ticket. An hour and a half later I get to the window to hand in my solicitud. He stamps it three times, but oddily, the funcionario hands back the two postage stamps I have offered. Stamps not needed; left hand is not talking to right hand. Sit down, I am told, and my name will be called.

Another hour passes. With a sigh that says ‘sorry, it’s not my fault’, the lone funcionario at window #12 throws up his hands and goes to lunch. Luckily, I have cookies and water for the long wait; unfortunately the soda that used to be open to the public in the Immigration Department is now only available for employees. Be prepared, scouts motto.

Having read half a book on my kindle, the funcionaro returns, everyone has dozed off, I almost lose the will to live, when suddenly my name is called. Bravo! It has only taken four and half hours to extract a document from the Immigration Department.

My third trip to Immigration was with my wife. Hah! I thought, surely, having a Tica with me, nothing can go wrong. Wrong. We were passed around from office to office, each destination saying it was someone else’s department. If you have seen Michael Palin’s “Brasil”- you will know what it feels like. The problem is nobody likes to lose face and admit they don’t actually know the answer to your question- they just guess. Mercifully, we managed to accost an important looking man in a uniform who took pity on us and whisked us through the correct doors, by passing queues of desperate looking Nicaraguans clutching screaming babies.

And by the way, it takes three months to get your new ID. They can inform you when its ready provided you have a fax number (duh, doesn’t every Costa Rican?), if not, then you just have to guess when to come back.

How to Watch March Madness at Work?