Costa Rica Travel News – Costa Rica has two distinct coasts — Pacific Ocean and the Caribbean Sea — offering one great surf break after another. Surfers will find they have a lot of travel options, including bare-bone surfing cabanas or five-star luxury resorts. There’s also a variety of vibes to complete a primo surf vacation. Some surfers will thrive in the surf-town party atmosphere of Jaco, while others will prefer to bliss out in the relative seclusion of Matapalo. 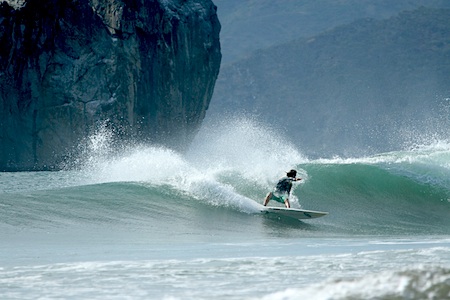 If they plan to scour the whole country for the perfect break, they may want to leave their board at home and take advantage of the surf rental shops at the major beaches. Beginners will find plenty with easygoing waves and surf schools ready to teach the basics. Water temperature also plays friendly, with an average of 80 degrees Fahrenheit. The Pacific side has the most consistent waves, although the Caribbean — when it’s rolling — has the biggest waves that attract the most advanced surfers.

There are more than 1,000 surf breaks in Costa Rica. Below are descriptions of 10 of them, designated for beginner, intermediate or advanced surfers.

Big-wave surfers come to this Puerto Viejo spot, where the country’s largest waves swell and burst upon the shore. Formed by an offshore coral reef, the waves are often compared to the monster ones seen in Hawaii. They mostly break right and sometimes go tubular, making the conditions demanding. The town of Puerto Viejo is in Limon province on the Caribbean coast, where there’s an engaging blend of Tico friendliness and Caribbean Rasta cool. Optimum surf conditions are December through March.

About five miles south of Costa Rica’s famous surf town of Jaco, this Pacific coast beach’s action is Steady Eddy. A consistent swell creating heavy waves presents a fast-breaking challenge, capable of breaking either left or right. Playa Hermosa is popular with both locals and visitors. Prime surfing can be had March through June, while the biggest waves roll in July through October.

Getting to this beach on the Guanacaste Peninsula takes some extra effort to get to — being only accessible by boat — but it’s worth it, as surfers can brag they tackled the same break that was featured in the movie Endless Summer II. This beach is a point break with fast rights giving a long ride. Ollie’s Point Surf Camp can provide surf charters out to the point, as well as lessons that will get beginners up for the challenge in no time. Optimum surfing is November through April, with the most challenging waves June through October.

While Jaco on the Pacific coast may not have the best conditions in Costa Rica, it definitely has the reputation as the country’s preeminent surf town. Here surfers and non-surfers can find plenty of nightclub action after the sun goes down. Playa Jaco is a 2.5-mile stretch of beach with breaks ideal for beginners and more advanced surfers. Surfers can rough it in beach cabanas or live large in upscale resorts. Since it’s the closest beach to the capital city of San Jose, it’s a popular beach getaway destination for Ticos.

Surfers will have to travel to the very tip of the Osa Peninsula, with 4X4 vehicles being recommended, to reach this place. Once they get there they’ll be rewarded with a right-point break that reaches triple overhead when the conditions kick in. Most of the year Matapalo is a forgiving break, but June through October the waves hit their peak and are more appropriate for advanced surfers. This is pretty rugged country so don’t expect much in the way of stores and services, although there are some rustic hotels providing accommodations and meals.

The Marino Ballena National Park is where surfers will find Playa Colonia. Here newbies will delight in a sandy bottom with easy-breaking waves. It never gets very crowded, which lessens the chance of more advanced surfers losing their cool with freshmen. Conditions are good year-round.

Samara is a beach-resort destination on Costa Rica’s Pacific coast, on the Guanacaste Peninsula. Playa Samara has waves breaking both ways. Since there’s a brace of rocks offshore, the waves remain on the mild side, with good conditions throughout the year. If advanced surfers are on the beach, they can opt to take a boat out to bigger waves beyond the reef. C&C Surf School and Choco’s Samara Beach Surf School can provide instruction that will soon have novices up on their boards and enjoying the waves.

This beach in Nosara, Guanacaste has several surf schools, since the conditions are good year-round, with clean breaking Pacific coast waves pounding in on a sandy beach, especially at high tide. Short boarders flock to Playa Guiones at low tide, when the waves grow quick and steep. The locals are friendly and welcoming, unlike some beaches, where an unpleasant “me and mine” attitude can sometimes prevail. Accommodations choices in Nosara range from large resorts to cozy B&Bs.

This Central Pacific Coast beach has one of the longest waves in Costa Rica, measuring out for a half-mile ride. In June, Boca Barranca hosts the annual Rabbit Kekai Longboards Classic and the Women’s World Longboard Championships, when up to 300 surfers convene from around the world to compete. There’s one unusual detail surfers should be aware of: river crocodiles sometimes get frisky with a saltwater swim and sidle on up to swimmers on the lineup.

This stretch of sand in Tamarindo has earned the nickname “Little Hawaii,” for its awesome long breaking waves creating prime conditions for longboarders. While the dry seasons from December through April will supply the most sunshine and blue skies, the best surfing can be had during the rainy season, from mid-May through November. Playa Avellanas even has its own mascot – a swimming pig named Lola, who can usually be found at Lola’s the beachfront eatery bearing its name.

Do You Want 50% Off Your Costa Rica Water Bill? Pray for Bad Service