The frequency of mild earthquakes that occurred during the months of May and June near the Turrialba and Irazu volcanoes are giving a warning to geologists from the National Seismological Network (RSN) of the University of Costa Rica (UCR).  The concern arose along the two fault lines, the Ariete and Elia, located on either side of the massif of Turrialba because they are generating microearthquakes (tremors with a magnitude less than 2 degrees). 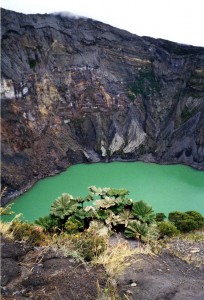 Wilfredo Rojas, of the RSN, said the Ariete fault line causes about 5 micro-earthquakes a week. However, the main concern is whether these faults have some contact with the magma of Turrialba.

“So far we have no evidence of contact or that the magma to move,” said Mario Fernandez, also from the RSN.

The link may be, it is presumed that the Turrialba volcano magma chamber is at a depth of four kilometers, while failures Elia Ram and dive into the soil to a depth of eight to five kilometers.

In a report prepared by the RSN, during the month of May, near the Irazu and Turrialba, there were 22 tremors surface, which had a magnitude of over 2 degrees. Meanwhile, until June 20 counts in the same area was 11 earthquakes.

Mario Fernandez explained that in the region, apart from the failure Ariete and Elia, other than in the past caused tremors.Rio Sucio mentioned failures, Lara and Honduras-country system. All show signs of activity.

Even, on June 25 there were three earthquakes, some 20 kilometers southeast of Turrialba volcano, and were located in Tres Equis, Turrialba.

Both the Volcanological and Seismological Costa Rica (OVSICORI) as the RSN ruled out any relationship between these shocks and volcanic activity.

The locals say they are quiet, they perceived no change. One of them, Hector Jimenez Jimenez, Pacayas Alvarado said he has not felt many earthquakes, but noted that the June 25, seconds before the quake, he heard “a noise like a truck makes the approach” and then felt the tremor. For the experts of the RSN, this occurs when the person is very close to the epicenter.

7 Highest Paid Political Mistresses & Should You Become One