The six Central American countries signed the Association Agreement with the European Union (EU), which makes consolidation and opening of the market in 27 countries one step closer.  They also signed a protocol with the conditions and terms to be Panama in their adherence to the subsystem of economic integration in Central America in Tegucigalpa, Honduras. 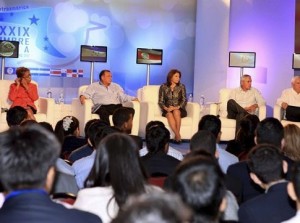 The two firms were in the XXXIX Meeting of Heads of State and Government of the countries of Central American Integration System (SICA).

The delegation of Costa Rica was led by President of the Republic, Laura Chinchilla, and the ministers of Foreign Trade (Comex), Anabel Gonzalez, and Foreign Affairs, Enrique Castillo.

Ministers of integration of Central and Trade Commissioner of the EU, Karel De Gucht, and Foreign Minister of Denmark, Villy Sovndal signed the document of the Partnership Agreement. Witnesses of honor were the leaders of the region.

There was an initial disagreement caused by Nicaragua in the meetings before yesterday and yesterday morning, questioning the legality of the accession protocol of Panama to regional integration, it finally passed yesterday.

Thus, Panama became adhesion and thereby meet the requirement requested by the EU to be part of the Partnership Agreement, initially negotiated only with the other five countries.

The EU is not a problem for the approval of the agreement in the European Parliament, said yesterday from Tegucigalpa, Deputy Director of the Directorate General for Trade of the European Commission and chief negotiator, Joao Aguiar Machado.

He explained that in November and by December they hope to have the probation of the legislative business of the Partnership Agreement, as the political and cooperation must be approved in each of the 27-member European Union.